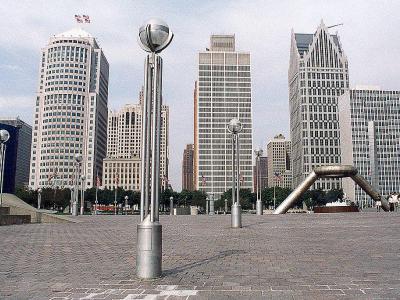 Hart Plaza is known as the Philip A. Hart Plaza. Philip Hart was a United States Senator from 1959 to 1976. This 14-acre (57,000 m2) land was dedicated to him in 1956. It is located Downtown Detroit, between the Detroit River and East Jefferson.

In 1979 was the completion of the Philip A. Hart Plaza. Hundreds of people come together during the summer for celebrations, concerts and festivals from May to Labor Day. People all over the Midwest and Canada join together for free, fun filled entertainment. There are a lot of things that happen in these buildings such as The North American International Auto Show (Cobo), many concerts and Detroit Red Wings Games (Joe Louis), and there are offices and restaurants in the RenCen. In recent years Hart Plaza have been added to by the Detroit International Riverfront.