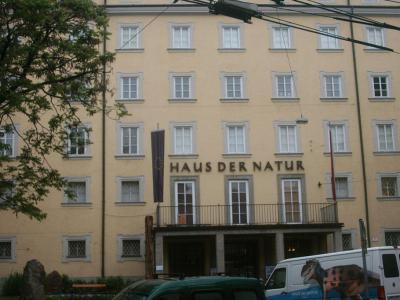 The House of Nature in Salzburg is one of the best natural history museums in Europe. It is a modern facility with a design based on the concept of an adventure museum.

The House of Nature was founded in 1927 by professor of zoology, Eduard Paul Tratz. He opened the museum with his personal collection. Professor Tratz continued to function as its curator until 1976. It is housed in a former convent which was abandoned in 1957. The House of Nature has over 80 rooms with animated exhibits and natural habitats. Many study groups with interests in various life science disciplines like entomology, ornithology, botany and astronomy meet and interact at the museum.

Exhibits at the museum include a range of stuffed animals, rocks and stones. There are replicas of giant dinosaurs including a moving simulation of an Allosaurus and a reconstructed dinosaur egg. It has dioramas showing landscape forms from across the world and a 'space hall' where visitors can feel the impact of a meteor falling on earth or experience the landing on the moon. Large models of the human body and an aquarium with forty parts representing different fish from different marine habitats are other attractions at the House of Nature.

Why You Should Visit:
Great museum for all different age groups; also, a big plus because it is inexpensive while offering a lot.
A large portion of the museum has helpful English displays, and there are many interactive exhibits as well.

Tip:
If you plan on going, make sure to plan enough time...