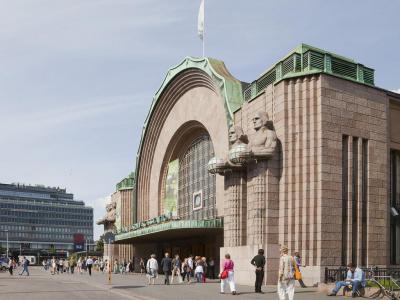 The Central Railway Station is one of the most visited and well-known sites in the city. There are over two hundred thousand passengers that pass through this place every day. On that basis, it is the single busiest building in the whole country.

The whole complex of rails in the country was started in 1860 when the first track was opened for business between Helsinki and Hameenlinna, a city 100 kilometer north of Helsinki. The first station here was designed by Carl Edelfelt. The station's popularity grew through the years, and so the location had to be renovated multiple times. The last such renovation was completed in 2003 when a shopping center was added to the complex.

One little known tidbit about this station is the Presidential Lounge. This private 50-square-meter waiting lounge is available for exclusive use of the President of Finland and his/her official guests. It was first built for the Emperor of Russia in 1911. After a short stint as a military hospital, it has been the private lounge for the President ever since. It is the only such structure known in the world.

Tip:
Underneath the station, there is a multitude of shops, including supermarkets, and also a walkway over to the other side of Kaivokatu street, which gets you into downtown.
Image Courtesy of Diego Delso.