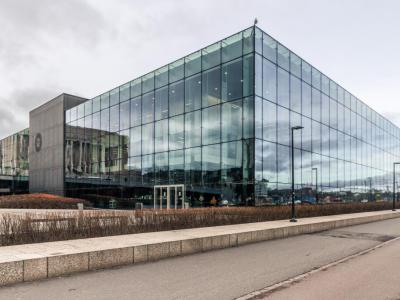 The Helsinki Music Centre is a concert hall and a music center in Töölönlahti, Helsinki. The building is home to Sibelius Academy and two symphony orchestras, the Finnish Radio Symphony Orchestra and the Helsinki Philharmonic Orchestra.

The Music Centre is located on a prestigious site between Finlandia Hall and the museum of contemporary art Kiasma, and across the street from the Parliament of Finland. The vineyard-type main concert hall seats 1,704 people. The building contains five smaller rooms for 140–400 listeners. These include a chamber music hall, a chamber opera hall, an organ hall, a 'black box' room for electrically amplified music and a rehearsal hall.

Helsinki Music Centre is a good example of Helsinki’s modernist architecture The site is highly challenging from a design standpoint, as all of the neighboring buildings are architectural landmarks of central national importance in Finland, and they represent a wide range of different architectural styles and periods. The winning entry in the architecture competition by LPR Architects was titled "A Mezza Voce", referring to an understated building that aims to unify the surroundings, as opposed to competing with them with a grand architectural gesture.

A large part of the Music Centre's considerable volume is placed underground in order to keep the roof of the building in line with its neighbors. A wide, sloping, landscaped terrace covers the underground structure and forms a part of an open park in front of the Parliament House. The large glass-walled foyer opens to the park. Unconventionally, the walls of the main concert hall are partly glass at the foyer level, allowing daylight from the foyer into the concert hall itself. The glass walls can be closed with curtains located in between the glass elements if daylight is not desired during a performance.

Chief architect Marko Kivistö has stated that the forms of the outside are deliberately simple, leaving the building to reveal a more varied and dramatic interior. The green color of the copper facade is designed to connect the building with the surrounding lawns and parks. The building aims to provide a frame for, and a new view at the more expressive curved shape of the museum of contemporary art, Kiasma, which stands across the park from the Centre.
Image by Matthias Süßen on Wikimedia under Creative Commons License.
Sight description based on wikipedia