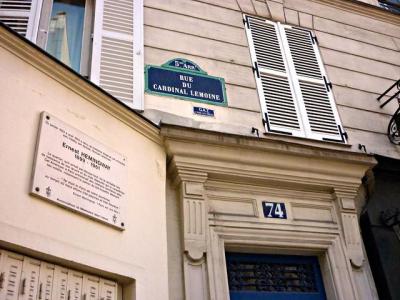 Ernest Hemingway lived here with his wife Hadley during their first year in Paris in 1922, when he worked as a foreign correspondent for the Toronto Daily Star. The two-room flat had no hot water and no toilet facilities and the couple slept on a mattress on the floor. Hemingway described this place in The Snows of Kilimanjaro: “From the apartment you could only see the wood and coal man’s place. He sold wine too, bad wine. The golden horse’s head outside the Boucherie Chevaline where the carcasses hung yellow gold and red in the open window, and the green painted co-operative where they bought their wine; good wine and cheap.”

During his free time, Hemingway met some of Paris' prominent writers and artists and forged quick friendships with them. Among the friends were James Joyce, Ezra Pound, Gertrude Stein, Max Eastman, Sylvia Beach, Lincoln Steffens, and Wyndham Lewis. He was also befriended with the painters Joan Miró and Picasso. These friendships would be instrumental in Hemingway's development as a writer and artist.
Image by Evan Bench on Flickr under Creative Commons License.