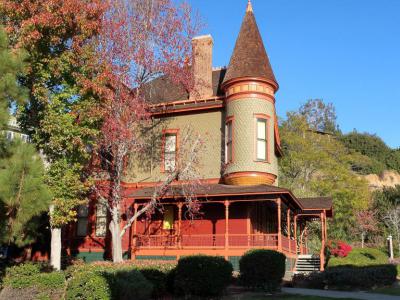 This 8-acre park, an architectural museum of sorts, is where the people of San Diego wisely and graciously chose to save some of their city's examples of fine Victorian houses built and owned by several of the people who made San Diego what it is, from around the turn of the century (as opposed to the colonial-era Old Town State Historic Park nearby).

A Jewish synagogue and six dwellings from the 1880-1890s are visual gems of a style of architecture and time long lost. The park is simply a replicated cobble-stone street and cul-de-sac, around which these buildings have all been relocated in the 1940s. The small red one, the Senlis Cottage/Park Office, has a one-room historical display explaining some of this process. The temple, the first Jewish house of worship in San Diego, was actually cut in half to move it! A good place to start, this cottage room (1896) and the Temple Beth Israel (1889) are the only two buildings open for visitors (from 9 to 5). McConaughy House (1887) has a small, traditional "tea room" operating within it as well.

All in all a nice stroll, and if you love Victorian styles and beautiful landscaping, this will be a great place for you!