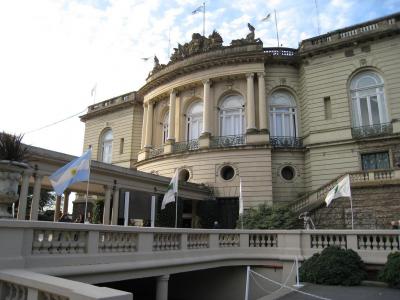 The Argentinean Hippodrome or the Hipódromo Argentino de Palermo is one of the most important horse racecourses in Argentina. Today, it houses a range of activities in addition to horse races.

The Argentinean Hippodrome was inaugurated in 1876. The design was a grand neoclassical style that reflected the prosperity of the country at the time. In 1898, a sales floor for auctioning thoroughbred horses was inaugurated. In 1908, the French architect designed an elaborate belle époque style main entrance and grandstand. A lake was created in the midst of the race tracks and a tree-lined space and marble statues were placed to add to the ornamentation of the venue.

The Hippodrome has been the scene of an advancement in horse racing technology called the Photochart, a photographic device that recorded the exact moment that the horse crosses the finishing line thus helping to decide the winner in neck-to-neck races resulting in the well-known term used in horse racing, ‘the photo finish’. Electric lighting was introduced in 1971 resulting in night races. In 1992, a private company took over the Hippodrome and made extensive renovations. Today, it houses a casino, high-end restaurants, a shopping center, theatre and a space for holding temporary art exhibitions.

Why You Should Visit:
The building itself is beautiful and in line with the elitist sport that is horseracing.
There are regular gastronomic shows and occasional open-door exhibitions as well as famous-brand outlets.
You can get close to the horses and the jockeys who let the crowds get near and caress their animals.

Tip:
Free access, no liquor, races every half hour, slot machines 24/7.
Image by blmurch on Flickr under Creative Commons License.

Buenos Aires is Argentina's most popular tourist destination. And it is the world capital when it comes to passion expressed in the rhythm of tango. This form of dance originated in the country and many of its styles were first developed here. So if you decide to spend your night moving in tango rhythms, here's our list of top tango spots in Buenos Aires.

Children have great imaginations and are always full of ideas when it comes to entertaining themselves. Luckily, Buenos Aires offers some great children's entertainment spots so your kids will enjoy visiting the city as much as you will. This self-guided tour presents some of the most popular attractions for kids in Buenos Aires.

Over the course of the first half of the 20th Century, a new form of modern architecture emerged in Buenos Aires as a result of social and political changes. This modern architecture was encouraged by advances in technology and engineering. The style is typified by diversity of form, complexity of structure and the volume of metal and plastic used. There are many examples of such modern...  view more