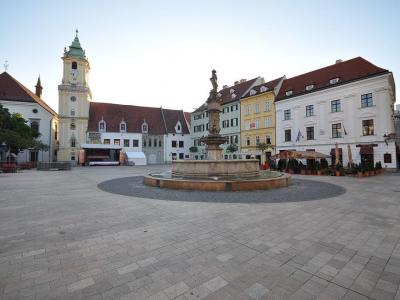 The central point in old town Bratislava, the Main Square, has been the hub of the town for centuries. It is surrounded by landmarks, including Kutscherfeldov Palace, Pawera House, Ungerov Dom, and the Maximillian Fountain. Additionally, tons of restaurants, cafes, and bars in the area keep it bustling.

During the winter months, the Main Square is home to Bratislava's Christmas fair. The entire area is decorated, and vendors set up stalls throughout the square. You'll find souvenirs, boiled wine, beer, and many different Slovak foods.

Over the years, the square has changed names several times. During World War II, it was named to honor Hilter. From 1948 to 1989, it was named for the day Bratislava was liberated by the Red Army--4 April Square.

The square is home to the Old Town Hall building and several other landmark buildings. Old Town Hall was built in 1599 and is the oldest in the country. Today, it houses a museum all about the town's history.

The Japanese and French Embassy are also located here.
Image Courtesy of Wikimedia and Jorge Láscar.