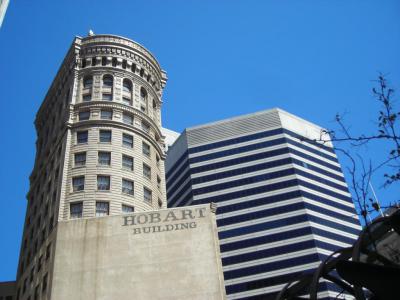 The Hobart Building is an office high rise located in the financial district of San Francisco. It was completed in 1914 after only eleven months, which led to accusations that it had been constructed with a degree of recklessness. It was at the time the second tallest building in the city, at 21 floors and 87 m (285 ft). Said to be the favorite commercial building of its designer, Willis Polk, its sculpted terra cotta exterior with Baroque ornamentation and handcrafted brass and Italian marble interior are a noted example of neoclassical architecture.

Its unusual shape was dictated by the site, which is an asymmetric polygon, and since a neighboring structure was torn down in 1967, exposing one flank, it is now even more idiosyncratic and striking. The Hobart Building was designated as a landmark by the City of San Francisco in 1983.
Image by Justin Pickard on Flickr under Creative Commons License.
Sight description based on wikipedia