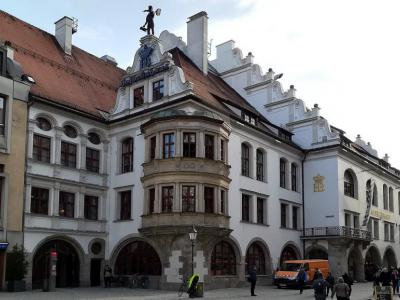 The Hofbräuhaus is probably the best-known “watering hole” in Munich. Dating all the way back to 1589, this beer hall was founded by the Duke of Bavaria, Wilhelm V, and originally, surprisingly enough, was not open to the public. Luckily for today's tourists and locals, though, in 1828 it finally opened up to the masses. Today, this hospitable spot, thick with traditional atmosphere and friendly vibes, is where you can come to enjoy typical Bavarian food to your heart's content, listen to the Oompah band play loudly on stage, and gulp down the rich Hofbräuhaus beer in large, one-liter steins, which the Germans call a Mass.

The Bavarian Beer Purity Law, passed in 1516, states that only natural ingredients can be used for beer brewing. To this day, this law is still duly adhered to and the beers of Munich, including Hofbräuhaus, are held to that high, delicious standard of beer making.

In case you want to take home one of the authentic huge Hofbräuhaus beer steins, you can find them at the Hofbräuhaus am Platzl gift shop at the cost of 10 to 15 Euros apiece. Just don’t tell any of your German friends that you might be willing to fill it up with something other than the pure, golden Hofbräuhaus beer. Never!!!

***Third Reich Walk***
Renowned for its beer, Hofbräuhaus also made mark in history on 24 February 1920, when Adolf Hitler held here one of his first propaganda gatherings.
Image Courtesy of Wikimedia and H.Helmlechner.