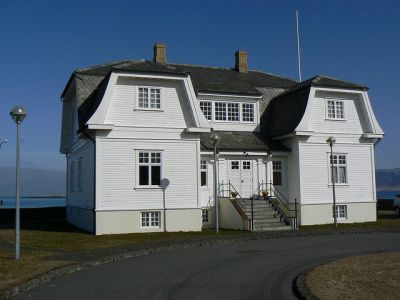 Hofdi is a Reykjavík house built in 1909 that has picturesque seascape views. Initially, it was built for the French consul Jean-Paul Brillouin in Iceland and was the exclusive residence of poet and businessman Einar Benediktsson (1864-1940) for many years.[1] It is best known as the location for the 1986 Reykjavík Summit meeting of presidents Ronald Reagan of the United States and Mikhail Gorbachev of the Union of Soviet Socialist Republics. That effectively was a step to the end of the Cold War. Even today, there are flags of these two countries on display. The city of Reykjavík purchased the house in 1958, restored it to its former glory. From that time used it for formal receptions and festive occasions. On 25 September 2009, on the building's 100th birthday, Höfði was damaged in a fire. All irreplaceable artifacts were saved. Many celebrities and rulers of various countries visited, lived or worked here. There is a sculpture in front of the house that represents the first Norwegian settler in Reykjavik.
Image by Peter on Flickr under Creative Commons License.
Sight description based on wikipedia