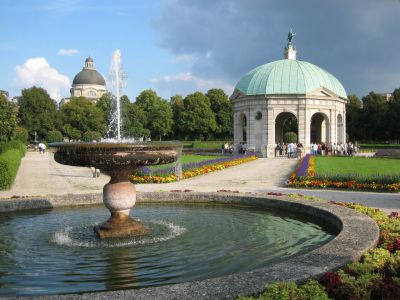 The Hofgarten is a peaceful oasis of greenery in the heart of Munich, found between the Residenz Royal Palace and the English Garden.

The garden was commissioned by the elector Maximilian I and laid in the Italian Renaissance style in 1613-1617. It is landscaped around two central paths that intersect at a pavilion, called the Temple of Diana. The pavilion was architected by Heinrich Schön the elder in 1615. Originally, a sculpture of Bavaria, created in 1623 by Hubert Gerhard, was placed at its rooftop. Today, only a replica thereof tops the Temple, while the original is kept in the Residenz. Largely destroyed during the Second World War, the Hofgarten was rebuilt based on the original landscape plans after the war.

Rich in its original 17th century ambiance, it has lawns and flower beds beautifully laid out. The original waterworks and fountains are restored and fully functional. In the northeast corner of the garden there is a square black granite monument to the White Rose group of philosophy students who were executed after a sham trial for conducting a non-violent struggle against the Nazi regime. The Hofgarten appears in T.S. Eliot’s poem, The Wasteland, as a symbol of the dying royal families of Europe and the emptiness of aristocratic life.

The Kriegerdenkmal ("warrior memorial"), on the eastern end of Hofgarten, in front of the Bayerische Staatskanzlei, commemorates the citizens of Munich killed in World War I. In the middle of its rectangular pit there is an open crypt with the statue of a fallen soldier. Rupprecht, Crown Prince of Bavaria, the son of the last Bavarian King, inaugurated the memorial site in 1924. However, it was entirely finished only in 1928. Today, the memorial is designated as a cultural heritage.
Image Courtesy of Wikimedia and Oliver Kurmis.
Sight description based on Wikipedia.