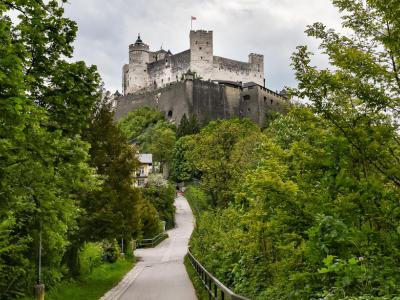 The Hohensalzburg Fortress is one of the largest medieval castles in Europe. It was built to protect the city and the ruling archbishops from enemy armies and insurgents.

Archbishop Gebhard von Helfenstein commissioned the construction of the Hohensalzburg Fortress in 1077 to protect Salzburg during a conflict between the Holy Roman Emperor Henry IV and Pope Gregory VII. At the time, the fortress was a simple wooden structure. Successive Archbishops expanded Hohensalzburg. Archbishop Leonhard von Keutschach expanded the structure and gave it its present shape and grandeur. In 1525, a group of Protestant peasants attempted to depose Archbishop Prince-Archbishop Matthäus Lang but were unable to take the castle. Some of the bullet marks caused by the siege can be still seen in the pillars. Archbishop Wolf Dietrich von Raitenau was imprisoned here. After the occupation by Napoleon’s army, it was used as barracks, a dungeon, and a storage depot. It became a tourist attraction after the installation of the Festungsbahn cable car in 1892.

The Hohensalzburg Fortress today remains one of Europe’s best-preserved castles. There is a small museum located inside exhibiting its history. Another notable feature is a large mechanical organ with 200 pipes called the Salzburg Bull placed in the Kraut Tower of the castle. The Golden Hall, the Golden Chamber and the bedchamber are richly adorned rooms in the interior of the fortress.

Why You Should Visit:
It is worth visiting this fortress for the view alone, but it is also a fascinating tour.
They do a great job telling the story of this fortress and its growth over the centuries.
The only downside is the crowds, but that shouldn't detract from the coolness of what you're looking at.

Tip:
Take advantage of online booking using the 'early bird' pricing. You scan tickets from your device to get access to the castle.
As usual, you exit through the gift shop, but the amber store has some nifty items (amber is apparently a thing in Salzburg).