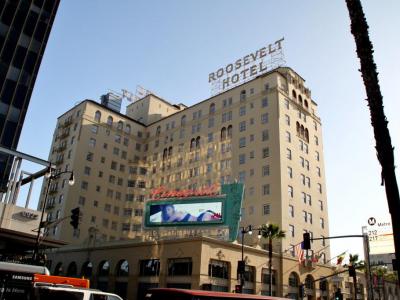 The Hollywood Roosevelt Hotel is a historic place located in the Hollywood district of Los Angeles. Opened on May 15, 1927, it is the oldest continually operating hotel in the city, and is an example of what is known as the Golden Era of Los Angeles architecture. The hotel was named after the 26th president of the United States, Theodore Roosevelt.

The first ever Academy Awards ceremony was held here on May 16, 1929, inside the Blossom Ballroom. At that time, the "Oscar" nickname for the award had not yet been invented. The hotel has hosted the Golden Raspberry Awards too, the ceremony recognizing the year's worst in film, on numerous occasions.

Several scenes from the 1988 film “Sunset”, starring Bruce Willis and James Garner, were filmed at the hotel, including a recreation of the 1929 Academy Awards ceremony. The scene of the 1989 film “The Fabulous Baker Boys”, where Susie (Michelle Pfeiffer) sings "Makin' Whoopie" while Jack (Jeff Bridges) plays piano, was shot at the Cinegrill nightclub inside the hotel.

Other films shot on the location include “Internal Affairs” (starring Richard Gere), “Beverly Hills Cop II” (starring Eddie Murphy) and “Catch Me If You Can” (starring Leonardo DiCaprio and Tom Hanks, directed by Steven Spielberg). Among television shows shot at the hotel are “Knots Landing”, “Moonlighting” and “Curb Your Enthusiasm”.
Image by chrisinphilly5448 on Flickr under Creative Commons License.
Sight description based on wikipedia