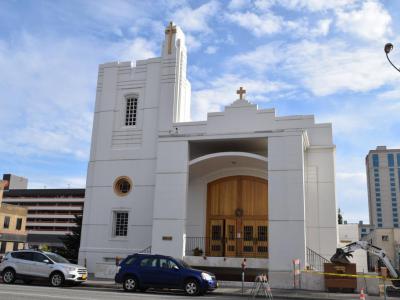 This Building with a neo-roman arquitecture is placed in Downtown Anchorage. On Good Friday of 1964, an earthquake with a magnitude of 9.2 devastated much of southcentral Alaska. The Pope's apostolic delegate came to view the damage, and upon doing so they saw that Anchorage would be the focal point of both state and spiritual growth. In 1966, the Holy See created the Archdiocese of Anchorage, and made Alaska a separate province.

Today, most of Alaska's archdiocese's Catholics worship in one of Anchorage's parishes. The Cathedral was the host church for the 1981 visit of Pope John Paul II to Anchorage, which attracted a crowd estimated at about 80,000 people.
Image by Pcland98 on Wikimedia under Creative Commons License.
Sight description based on wikipedia

Situated on the Cook Inlet, Anchorage is a surprisingly flourishing and cosmopolitan city with a wide variety of attractions. It is home to a large number of museums and art galleries, offering the possibility to explore Alaska's indigenous history and culture. Take this tour to explore the city's exciting past.

If you want to take home something by which to remember your trip to Anchorage, consider visiting the city's shops located in the heart of downtown. Here you will find articles made of materials that represent Alaska's treasures - gold, timber, whalebone and furs, along with indigenous artwork and hand-made souvenirs by native Alaskans. Take this self-guided tour and visit the best...  view more

The city of Anchorage was founded at the beginning of the 20th century and has since grown to become Alaska's largest city. Nowadays it is a modern prosperous city with a well developed infrastructure. A rather short, yet captivating story of Anchorage can be observed when visiting its major attractions. Explore this unique city by taking a landmarks tour around downtown

Anchorage is a great place to have fun with your family. This city welcomes children of any age to enjoy delicious desserts in local sweet shops and have fun visiting fascinating museums, interactive theatres and souvenir shops. Take this tour to explore the family-friendly city of Anchorage.