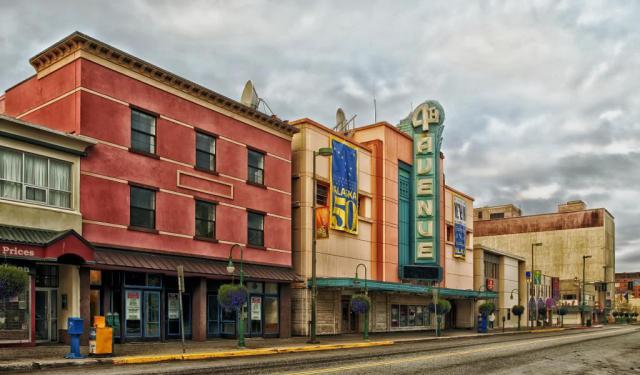 Many of the buildings from that era have survived the destructive 1964 Good Friday Earthquake and today stand as a reminder of the sacrifices that Anchorage’s founding fathers had made to give a future to their budding brainchild. Among them is the 4th Avenue Theatre, the Art Nouveau gem which is one of the city’s most beloved landmarks and Alaska’s most popular entertainment venue.

Strolling through town, you wouldn't want to miss the historic Old City Hall – a two-story cast concrete edifice from 1936; or the Anchorage Hotel – first built in 1916, among whose guests at one time was Herbert Hoover, the 31st president of the United States; or the city’s first building – the wood-frame Oscar Anderson House, offering a glimpse of Anchorage's earliest roots: the interior style and daily life of Alaskans back in the early 1900s.

Other noteworthy structures include many of the adorable circa-1915 cottages that line 4th Avenue, and the Alaska Railroad's Anchorage Depot built in 1942.

If you want to hear more stories of Anchorage's earliest days and visit these and other relevant locations, as if led by the local Alaskan who knows each and every corner and (almost) every secret of this captivating city, take our self-guided walk!
Image Courtesy of Free commercial use No photo credits required.
How it works: Download the app "GPSmyCity: Walks in 1K+ Cities" from iTunes App Store or Google Play to your mobile phone or tablet. The app turns your mobile device into a personal tour guide and its built-in GPS navigation functions guide you from one tour stop to next. The app works offline, so no data plan is needed when traveling abroad.

The Wendler Building is not only one of the oldest buildings in Anchorage, but it is also the only one with a corner turret. It was built in 1915 by A.J. Wendler to operate as a grocery store, with its owner's apartments situated above, on the second floor. It is the oldest commercial building in the city. Nowadays the building serves as a gift shop. The bronze statue of a dog in front of this building marks the starting point of the Iditarod Trail Sled Dog Race held in Alaska each year.
Image Courtesy of Flickr and dsmith_stg.
2

The hotel outgrew its original building due to Anchorage's growth in the 1930s, so the Anchorage Hotel Annex was built in 1936 to house additional guests. The annex, designed by E. Ellsworth Sedille, had a Gothic design and was one of the tallest buildings in Anchorage at the time. Guests at the hotel included Warren Harding, Harold L. Ickes, Walt Disney, Wiley Post, and Will Rogers; the latter two stayed at the hotel only two days prior to their deaths in a plane crash. In addition, artist Sidney Laurence lived in the hotel for parts of the 1920s and 1930s; Laurence once exchanged a painting of Mount McKinley for a year's rent at the hotel.

In the 1950s, the hotel declined in status, and the buildings suffered from a lack of maintenance. The original hotel building was demolished in the 1960s, while the annex became the Hotel Ronald Lee; after a number of ownership changes, Bob and Carolyn Neumann rehabilitated the hotel in the late 1980s. After its renovation, the hotel regained its original name; it now operates as the Historic Anchorage Hotel.

The annex was added to the National Register of Historic Places on April 15, 1999.

Image Courtesy of Wikimedia and Dmadeo.
Sight description based on Wikipedia.
3

The Old Anchorage City Hall was home to the administration of the city of Anchorage from its inception in 1936 through 1979. The building was designed by architect E. Ellsworth Sedille in the Beaux-Arts architectural style.

Also known as Historic City Hall, the building is constructed from cast concrete. A range of masonry techniques were used for the round-arch opening and the voussoirs of the first floor. The second floor has a smooth finish with a classical parapet.

Visitors to Anchorage may wish to include The Old Anchorage City Hall on their itinerary so they can see the historic architecture from the outside and take advantage of the tourism information inside. The building is now home to Visit Anchorage, the city's visitor and convention bureau. Thanks to its central location, there are many attractions nearby. Some of these include the Old City Hall Park, the Federal Building and the Alaska Center for the Performing Arts.

The Old Anchorage City Hall was listed on the National Register of Historic Places in 1980.
Image Courtesy of Wikimedia and MKincaid.
4

The Fourth Avenue Theatre, also known as the Lathrop Building, is a movie theater in Anchorage, Alaska that has been described as Art Deco, Streamline Moderne, and Art Moderne in style. Built beginning in 1941 and completed in 1947 after a halt during World War II, somewhat after the heyday of these styles, it was a large 960-seat first-run theater until the 1980s.
Image Courtesy of Wikimedia and Jet Lowe.
Sight description based on Wikipedia.
5

The Oscar Anderson House Museum is one of the oldest homes in Anchorage. It was built in 1915 by early resident and prominent business owner, Oscar Anderson. Born in Sweden, Anderson claimed to have been the 18th person to settle in Anchorage. The building is the first wood-framed house built in the city. It was placed on the National Register of Historic Places in 1978.

Anderson lived in the house until his death in 1974. At that time, his widow, Elizabeth Anderson, donated the house to the city. It was fully restored and open as a museum in 1984. The house allows visitors a unique view of life in Alaska prior to statehood.

Visitors may tour the home from June 1 through September 18. Advanced reservations are required. Those visiting in the winter months may be able to take advantage of the home's special Christmas openings. The house is decorated for Christmas and Swedish treats are served to all guests.

The Alaska Engineering Commission Cottage No. 25 is a historic house in Anchorage. It is a two-story wood frame structure, with a low-pitch gable roof that has wide overhanging eaves with exposed rafter tails. It was designed and built in 1917 by the Alaska Engineering Commission, a Federal agency charged with building railways in Alaska. It is one of the second set of such housing built by the commission, and is now owned by Anchorage Historic Properties.

The cottage was listed on the National Register of Historic Places in 1996
Image Courtesy of Wikimedia and Dmadeo.
Sight description based on Wikipedia.
7

The Alaska Engineering Commission Cottage No. 23, also known as DeLong Cottage, is an historic house in Anchorage. It is a 1-1/2 story wood frame structure, with a gable roof and porch extending across its front. It was designed and built in 1916 by the Alaska Engineering Commission (A.E.C.), the federal government project to build the Alaska Railroad. Of the surviving cottages built by the commission, it is the least-altered and best-preserved.

The cottage was listed on the National Register of Historic Places in 1990 as A. E. C. Cottage No. 23. It has also been known as DeLong Cottage.
Image Courtesy of Wikimedia and Carlsonjjohn.
Sight description based on Wikipedia.
8

The Leopold David House is a historical building located in Anchorage. It is a 1-1/2 story bungalow-style house with a wooden frame structure. It features a front-gable roof and dormers. The front facade is divided into two sections: the left with a projecting bay section, and the right with a gabled porch. The roofs have deep eaves with Craftsman-style brackets. The house was built about 1917 for Leopold David (1878-1924), an early resident of Anchorage and its first mayor, elected in 1920. It is one of the best-preserved houses of the period in the city.

The house was listed on the National Register of Historic Places in 1986.
Image Courtesy of Wikimedia and JERRYE & ROY KLOTZ MD.
Sight description based on Wikipedia.
9

The Alaska Railroad Depot, sometimes referred to as the Anchorage Depot, is the a station near the center of the Alaska Railroad system. Tourists can take trains leaving Anchorage that go to Denali, Seward, Fairbanks and a number of stops along the way. There are also Glacier Discovery Routes for those passengers who wish to view glaciers without a hike or cruise.

The railroad depot itself is a tourist destination even for those without plans to ride the rails. The building was constructed in 1942 using a design by architect Joseph L. Skoog. The three-story building is made entirely of concrete and steel. The Alaska Railroad Depot was placed on the National Register of Historic Places in August 1999.

The depot opens at 5:30 AM during summer months. It closes at 5 PM during the weekdays and 4 PM during the weekends. Those visiting in the winter can tour the depot from 8 AM to 5 PM, Monday through Friday or 7:30 PM to 3 PM on Saturdays and the first Thursday of each month.
Image Courtesy of Flickr and Andrei Taranchenko.