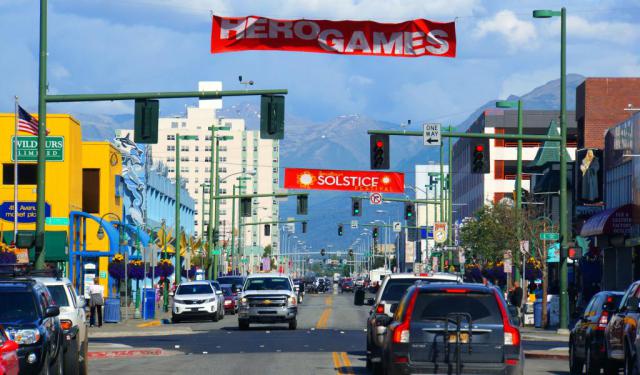 Though Anchorage was settled in the 20th century, archaeological evidence shows human life in the region dating back more than 5,000 years. Visitors to Anchorage are able to learn more about the earliest inhabitants of the region at the Anchorage Museum and Imaginarium Discovery Center. They can also see works of art from local artisans while also finding out more about the plant and animal life in Anchorage.

Tourists to this city can find old buildings, like the Holy Family Old Cathedral and the Old Anchorage City Hall, as they walk down the city streets. They will glimpse pieces of Alaskan history at the Oscar Anderson House Museum before relaxing at the Town Square Municipal Park. Anchorage also has plenty of shopping and dining options for the weary tourist.

Take this self-guided tour to explore the beauty and culture of Anchorage, Alaska.
Image Courtesy of Flickr and Teo Romera.
How it works: Download the app "GPSmyCity: Walks in 1K+ Cities" from iTunes App Store or Google Play to your mobile phone or tablet. The app turns your mobile device into a personal tour guide and its built-in GPS navigation functions guide you from one tour stop to next. The app works offline, so no data plan is needed when traveling abroad.

The Old Anchorage City Hall was home to the administration of the city of Anchorage from its inception in 1936 through 1979. The building was designed by architect E. Ellsworth Sedille in the Beaux-Arts architectural style.

Also known as Historic City Hall, the building is constructed from cast concrete. A range of masonry techniques were used for the round-arch opening and the voussoirs of the first floor. The second floor has a smooth finish with a classical parapet.

Visitors to Anchorage may wish to include The Old Anchorage City Hall on their itinerary so they can see the historic architecture from the outside and take advantage of the tourism information inside. The building is now home to Visit Anchorage, the city's visitor and convention bureau. Thanks to its central location, there are many attractions nearby. Some of these include the Old City Hall Park, the Federal Building and the Alaska Center for the Performing Arts.

The Old Anchorage City Hall was listed on the National Register of Historic Places in 1980.

Image Courtesy of Wikimedia and MKincaid.
2

The Oscar Anderson House Museum is one of the oldest homes in Anchorage. It was built in 1915 by early resident and prominent business owner, Oscar Anderson. Born in Sweden, Anderson claimed to have been the 18th person to settle in Anchorage. The building is the first wood-framed house built in the city. It was placed on the National Register of Historic Places in 1978.

Anderson lived in the house until his death in 1974. At that time, his widow, Elizabeth Anderson, donated the house to the city. It was fully restored and open as a museum in 1984. The house allows visitors a unique view of life in Alaska prior to statehood.

Visitors may tour the home from June 1 through September 18. Advanced reservations are required. Those visiting in the winter months may be able to take advantage of the home's special Christmas openings. The house is decorated for Christmas and Swedish treats are served to all guests.

Holy Family Old Cathedral was the mother church of the Archdiocese of Anchorage from 1966 to 2020. The original parish was established in 1915 when Anchorage was founded. The first building was made from cement blocks with a wood frame. It was the first church built in the city.

Construction on the new church began in 1946 after years of fundraising. It was designed by architect Augustine A. Porreca in the Romanesque Revival architectural style. Though services began in this church in 1947, it wasn't completed until 1952.

Pope John Paul II held a papal audience in the Cathedral during his visit to Anchorage in 1981. The event attracted a crowd estimated at about 80,000 people.

The church was given the moniker of Old Cathedral in 2020 after the Archdiocese moved to Our Lady of Guadalupe Church. This move came because the size of the church could no longer hold the ever-growing congregation.

Town Square Municipal Park is a large, downtown park in the center of Anchorage. It is located near the Civic and Convention Center, the Alaska Center for the Performing Arts and many dining and shopping establishments.

Plans for the park were made in 1984 when the Performing Arts Center was built. The idea to have a downtown park as a place to gather and have community events has culminated in an open-air park that has been in continuous construction and upgrades since 1988.

The park includes shade trees, benches, walkways and an ice skating rink that is active in the winter. Each tree in the park is lit at night. The Town Square Municipal Park a good place to visit during the day and a peaceful spot to stop by in the evening. There are regular performances that pop up throughout the year. Visitors can even put on their own shows as an outdoor piano is sometimes made available for public use.
Image Courtesy of Wikimedia and An Errant Knight.
5

A large outdoor mural depicting several life-size whales was painted on the western wall of the J.C. Penney store building. Its author, Robert Wyland, is famous for decorating walls of buildings all over the world with full-size paintings of marine life. Wyland received invitations from organizations and building owners from all over the world and has painted over 100 Whaling Walls.

The mural on the wall of the J.C. Penney store building is five story high and over 120 meters long. It is the largest and most impressive painted wall mural in Anchorage.
Image Courtesy of Wikimedia and Reywas92.
6

The Anchorage Museum and Imaginarium Discovery Center is a history, art and science museum that focuses on the culture and history of Alaska. The museum opened in 1968 with an expansion in 2010 that added the discovery center. The museum building features a Modern architectural style.

The museum offers a permanent collection and about 16 to 20 visiting exhibits each year. The museum has more than 25,000 permanent objects on display and more than 500,000 historic photographs. Permanent exhibits include a historical gallery, an art gallery and native artifacts. It is also the home of the of the Alaska office of the Smithsonian's NMNH Arctic Studies Center.

The Imaginarium Discovery Center is a hands-on science center with a large number of interactive exhibits. It also includes a planetarium and a marine animal exhibit that allows patrons to touch animals like sea stars.

The museum and science center is open Tuesday through Saturday from 10 AM to 6 PM and Sunday from noon to 6 PM. It is closed on Mondays.
Image Courtesy of Flickr and lns1122.
7

Weekends at the 4th Avenue Marketplace offer a local artisan market. Arts and crafts created by local artists are in boutiques throughout the week, but weekends have even more offerings. Shoppers will find native carvings, jewelry, clothing, prints and toys. Some artists provide outdoor demonstrations during the summer months.

Boutiques and restaurants at the 4th Avenue Marketplace are open Monday through Friday from 8 AM to 6 PM. They are open on weekends from noon to 6 PM. Special events at the marketplace are advertised through the business's Facebook page. Past events have included area-wide craft fairs, pageants and talent competitions.
Image Courtesy of Flickr and Teo Romera.
8

The Wendler Building is not only one of the oldest buildings in Anchorage, but it is also the only one with a corner turret. It was built in 1915 by A.J. Wendler to operate as a grocery store, with its owner's apartments situated above, on the second floor. It is the oldest commercial building in the city. Nowadays the building serves as a gift shop. The bronze statue of a dog in front of this building marks the starting point of the Iditarod Trail Sled Dog Race held in Alaska each year.
Image Courtesy of Flickr and dsmith_stg.