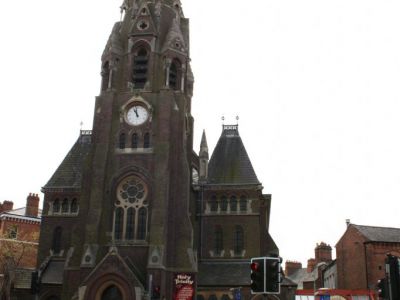 The Church Building Act of 1818 provided funds for two new Leicester parishes, one of which was Holy Trinity. The church was built in 1838 in accordance with classical design as the city expanded, and formed part of a new suburb. In 1872, Holy Trinity was completely redesigned in a High Gothic style, with spire and side turrets in red-purple brick with limestone decoration. In the 19th century, the church had wooden pews and a single central aisle, with balconies on both sides of the church; the central aisle was occupied by the middle classes and the balconies by their servants. A significant building project was undertaken in the late 1980s, and there is now a single balcony at the rear of the church. The church and nearby buildings are now part of the New Walk conservation area.
Image by Pjparkinson on Wikimedia under Creative Commons License.
Sight description based on wikipedia