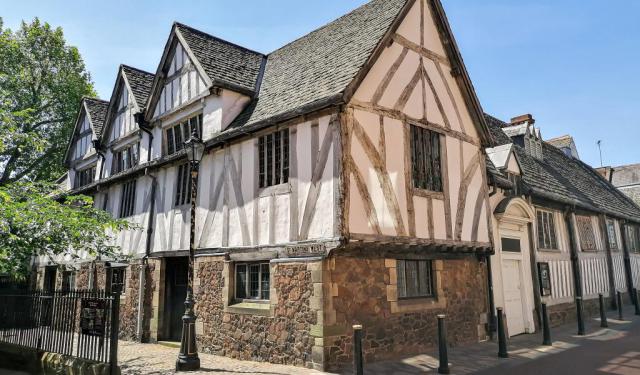 Image by Helen Wells on Flickr under Creative Commons License.

Leicester is a city in the East Midlands of England with a rich past. Valuable historical monuments in Leicester are under the special protection of the local government and are the pride of the city. Take this historical tour of central Leicester and learn about the city's medieval history.
How it works: Download the app "GPSmyCity: Walks in 1K+ Cities" from iTunes App Store or Google Play to your mobile phone or tablet. The app turns your mobile device into a personal tour guide and its built-in GPS navigation functions guide you from one tour stop to next. The app works offline, so no data plan is needed when traveling abroad.

The Haymarket Memorial Clock Tower is a major landmark and popular meeting point in Leicester. It is located roughly in the middle of the area inside the ring-road, and is at the point where five major streets (Gallowtree Gate, Humberstone Gate, Belgrave Gate, Church Gate and Eastgates) meet, and also close by to the junction with Cheapside. The Clock Tower is the de rigueur meeting place in the city centre.

The Clock Tower was constructed in 1868. It was built mostly in Ketton stone with a base of Mountsorrel granite, and incorporates column shafts made of polished Peterhead granite and serpentine. The statues were made from Portland stone. The site was directly above the junction of two of the city's main sewers which were modified prior to the tower's construction. Officially a memorial, the Clock Tower has four statues of sons of Leicester, one at each corner. The figures are Simon de Montfort, William Wyggeston (spelt 'William Wigston' on the tower itself), Thomas White and Gabriel Newton.

Image by Steve Cadman on Wikimedia under Creative Commons License.
Sight description based on wikipedia
2

Leicester Market is located on Market Place just south of the clock tower. It is open Monday to Saturday and has over 270 stalls. It is around 800 years old but was moved to its current site around 700 years ago. It is the largest outdoor covered market in Europe. At the market you can find a wide variety of goods, particularly fruit and vegetables, but also flowers, clothes, second-hand books, bric-a-brac and jewelry. The indoor market (1973) is housed in a multi-level building and includes the fish vendors and delicatessen, as well as stalls selling clothes, haberdashery, footwear, jewelry and confections.
Image by chelmsfordblue on Flickr under Creative Commons License.
Sight description based on wikipedia
3

3) The Guildhall (must see)

The hall was used for many purposes, including council meetings, feasts, as a courtroom, and for theatrical performances. The Guildhall was also used for banquets, festivals, and as a home for a priest who prayed for the souls of Guild members in the nearby St Martin's Church. The Guildhall was retained in use until quite late. It was not until 1876 that the Corporation moved to the new Leicester Town Hall. It was later used as a police station and school, before becoming a museum.

St Nicholas' Church is an Anglican parish church and the oldest place of worship in Leicester. It is situated next to the Jewry Wall, the remnant of the city's Roman baths. Parts of the church date back to 880 A.D., and a recent architectural survey suggested possible Roman building work. Today, the church lies just outside the city's inner ring road. Despite being some distance from the campus, it is the official church of the University of Leicester. The organ was built in 1890 by the local firm of J. Porritt and incorporates pipework from an earlier organ by an unknown builder dating from the 1830s. The church has three bells, dated 1617, 1656 and 1710, that were taken down from the tower in 1949 and replaced with one large bell. Because the tower is not very strong, they were re-hung for stationery chiming. They were returned to the church in July 2002 and were rung to welcome Queen Elizabeth II on her Jubilee Visit to Leicester.
Image by NotFromUtrecht on Wikimedia under Creative Commons License.
Sight description based on wikipedia
5

The Jewry Wall is believed to be the remaining wall of the public baths of Roman Leicester along with foundations of the baths, which are laid out in front of the wall. The wall is nearly 2,000 years old and is a rare example of Roman walling. It is the second largest piece of surviving civil Roman building in Britain. The Jewry Wall would have been the wall separating the gymnasium from the cold room. The remains of the baths were excavated in the 1930s by Dame Kathleen Kenyon and date from approximately 160 A.D. The wall and baths are adjoined by the Jewry Wall Museum, which contains excellent local examples of Roman mosaics and wall plaster. The name of the wall is unlikely to relate to Leicester's Jewish community, which was never large, and which was expelled from the town by Simon de Montfort in 1231.
Image by NotFromUtrecht on Wikimedia under Creative Commons License.
Sight description based on wikipedia
6

St. Mary de Castro (meaning St. Mary of the Castle) is an ancient church located near Leicester Castle. Today it acts as a parish church in the Church of England's diocese of Leicester. It dates its founding to 1107 when Henry I of England took the lands and castle from a rebellious owner and granted them instead to Robert de Beaumont, although some legends say that a Saxon church of St. Mary had existed before the Norman Conquest. It was rebuilt in the 1180s and has since undergone alterations, including the addition of a spire in 1400. The collegiate nature of the church lasted until the college was disbanded in 1548 by Henry VIII.
Image by NotFromUtrecht on Wikimedia under Creative Commons License.
Sight description based on wikipedia
7

Leicester Castle is situated west of the city center, between Saint Nicholas Circle to the north and De Montfort University to the south. The castle was probably built around 1070 (soon after the Norman Conquest in 1066). The remains now consist of a mound, along with ruins. Originally the mound was 40 ft (12.2 m) high. Kings sometimes stayed at the castle. John of Gaunt and his second wife Constance of Castile both died here in 1399 and 1394 respectively. Eventually, however, the castle was used mainly as a courthouse, rather than a residence. A section of the castle wall adjacent to the Turret Gateway has gun loops that were poked through the medieval wall to use as firing ports by the city's residents when parliamentarian Leicester was besieged, captured, and ransacked by the royalist army in the 1640s during the English civil war. The Castle Gardens are located along the bank of the canal.
Image by Dawkeye on Wikimedia under Creative Commons License.
Sight description based on wikipedia
8

The Magazine Gateway was built in 1410 and is one of Leicester's top attractions. It once served as an entrance to the Castle of Leicester, although it never had doors. The Gateway was principally ceremonial and was meant to impress visitors to the city. It also was the entrance to the Newark District, which was one of the best places in Leicester to live, as residents of this district could avoid taxes.
Image by Fiery Fred on Flickr under Creative Commons License.