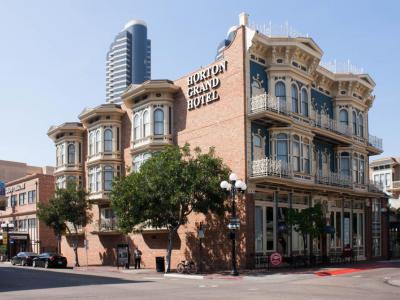 Located across the street from the Gaslamp Museum, this brick building is so worth a drop-by and look-see. A restoration of two historic hotels – the Grand Horton and the Brooklyn-Kahle Saddlery – that were joined together in a truly seamless manner, while the courtyard between them is brick-paved and tree-lined, evoking a New Orleans vibe.

Built in 1887 as part of a building boom that followed the opening of the city's first transcontinental railroad connection, the Grand Horton was a luxury hotel with a design based on Vienna's Innsbruck Inn and featuring an Italianate Victorian style. Built around the same time as the Grand Horton, the Brooklyn-Kahle Saddlery was a less formal hotel that combined Western/Cowboy and Victorian styles.

Both hotels were scheduled for demolition in the 1970s when the City of San Diego purchased them to build the Horton Plaza shopping center on the site. They were dismantled brick by brick, with each brick numbered, catalogued, and stored. In 1986 they were rebuilt into an entirely new hotel at the present location at Fourth Street and Island Avenue.
Image Courtesy of Wikimedia and Bernard Gagnon.