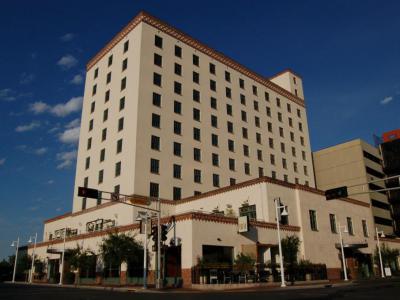 Opened on June 9, 1939 as the Hilton Hotel, it was Conrad Hilton's fourth hotel and the first modern high-rise hotel in the state. Architect Anton F. Korn designed the 160-room ten-story building in the New Mexico Territorial style, with earthtone stucco, brick coping along the roofline, and southwest-style woodwork and furnishings. In 1969, after Hilton built a new hotel nearby, they sold the hotel and it became the Hotel Plaza. It was sold again in 1981 and closed.

The new owners planned to restore it as the Hotel Bradford, but the hotel sat vacant and never opened under that name. The hotel was finally renovated in 1984, with the number of rooms reduced to 114. It was placed on the National Register of Historic Places, and reopened on August 3, 1984 as La Posada de Albuquerque.

In 2005, the hotel was purchased by Gary Goodman, whose company Goodman Realty Group is also behind the upcoming Winrock Town Center. In March 2008, the hotel underwent an extensive $30 million renovation and restoration, reopening as Hotel Andaluz on October 1, 2009. The hotel was honored with LEED Gold certification for its sustainability, and has been recognized many times over the years by Conde Nast as one of the top hotels in the U.S. southwest.

During 2019, the hotel was used as a location for scenes in the fifth series of the television drama Better Call Saul.
Image by Camerafiend on Wikimedia under Creative Commons License.
Sight description based on wikipedia