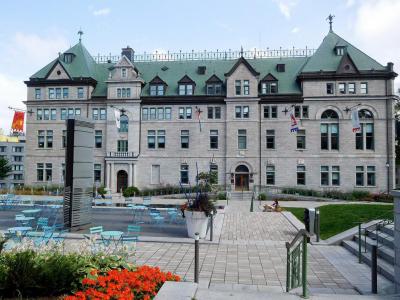 The City Hall of Quebec City (Hôtel de ville de Québec) is located in the heart of Old Quebec. It was inaugurated on September 15, 1896. The building slopes downward as it was built on a hill and was once home to the Jesuit College (Jesuit Barracks) from the 1730s to 1878. The city hall was designated a National Historic Site of Canada in 1984. The building is also located within the "Arrondissement historique du Vieux-Québec" (Historic District of Old Quebec), a district that was designated under provincial heritage legislation in 1963 and listed as a World Heritage Site in 1985. Located on rue des Jardins and designed by architect Georges-Émile Tanguay (1858-1923), it is the second permanent city hall for the old city. From 1842 to 1896 City Hall sat at home of British Army Major General William Dunn at rue Saint-Louis and rue Sainte-Ursule. Prior to 1842 the city government sat a various sites. The formal city council was established in 1833.
Image by Gilbert Bochenek on Wikimedia under Creative Commons License.