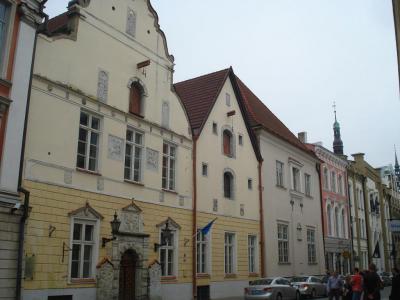 House of the Brotherhood of Black Heads, Tallinn

If you want to get a chance to see a piece of beautifully preserved Renaissance architecture in Tallinn, then you will want to visit the House of the Brotherhood of Black Heads. In fact, it is the only such surviving structure in downtown Tallinn.

From a historical perspective, the House was owned by an organization of young merchants from other countries, who worked throughout Estonia and Livonia during the late 14th Century. A house of some sort was on the property here for many years before the group purchased the land in the 16th Century. Major reconstruction took place in 1597.

From an architectural standpoint, the building reflects a Dutch interpretation of Renaissance artwork and styling. For instance, it is a two nave arched hall. The stunning painted doors are also quite Dutch in style, and are common among similar buildings located throughout the Low Countries. There is lots of ornamentation in the trim and doors of the building also.

The institution is open to the general public every day of the week from 10:00 a.m. until 7:00 p.m. The best part is that admission is free. Occasionally, the location is used as a venue for concerts and conferences.
Image by Robert Campbell under Creative Commons License.

This sight is featured in a self-guided walking tour of Tallinn, Estonia within the mobile app "GPSmyCity: Walks in 1K+ Cities" which can be downloaded from iTunes App Store or Google Play. Please download the app to your mobile phone or tablet for travel directions for visiting this sight. The app turns your mobile device to a personal tour guide and it works offline, so no data plan is needed when traveling abroad.

Tallinn is home to several of Europe's most interesting and impressive museums. The museums specialize in everything, from history and art to old-fashioned dolls, photo cameras, musical instruments, and sea mines. Take a journey through Tallinn's museums and explore the history and culture of this great city.

Tallinn boasts a wide selection of art galleries, most of which are concentrated in the Old Town. The galleries often change their exhibitions every few days, so the experience is always fresh and exciting.