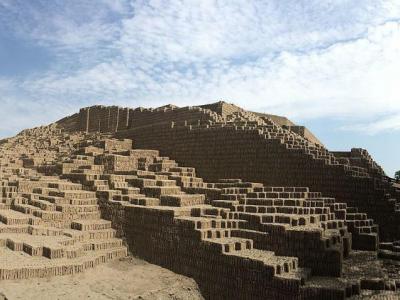 Huaca Pucllana is an archaeological site dating circa 200-700 AD, located in the Miraflores district of Lima. The staggering seven platform pyramid is made of adobe (small, handmade bricks, dried in the sun) and clay, and was popularly known as the place for ritual games. The mega structure stands almost 22 meters high, and is divided into two sections: one for ceremonial and the other for administrative use. The ceremonial section contains benches and deep pits that were designated for offerings of fish and miscellaneous marine life to the gods in a bid to win their favor. A part of this section features multiple small huts and clay structures with few walls still in place that once served as courtyards and patios.

The intended purpose of this pyramid was to demonstrate the religious might of the elite clergy and their ability to control the use of local natural water resources. The place serves as a significant ceremonial and administrative center for promoting Peruvian culture. There are tourist guides available for visitors to the museum, a little park whith native flora and fauna, and a house of craftsmen where handicrafts are exhibited and offered for sale.

Why You Should Visit:
Easily accessible from Miraflores, well preserved, with tour guides sharing interesting details about the construction, religion, and lifestyle of the original and subsequent inhabitants.
The pyramid is attractively lit up at night and one of the best spots to view this is at the on-site restaurant which features delicious haute cuisine.
The small garden and animal farm (with llama, cuyi, etc.) is cute and adds a little dimension to the place.

Tip:
This is a "guided-tour-only" site with the duration of a little over an hour (~20 mins above the pyramid). You could stop by here on your way to the Miraflores clifftop which is about a half-hour walk south (by turning right onto Ave. Arequipa), with the small John F. Kennedy park along the way for a brief stop before getting to the cliff where you can spend about half a day up and down.