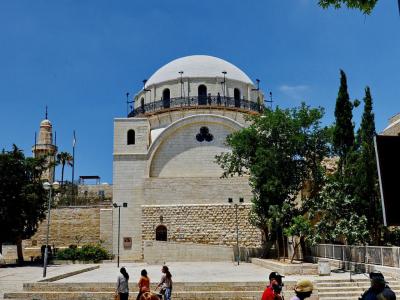 The Hurva Synagogue is a testament to the perseverance of the Jewish community in Jerusalem. It has been built and destroyed no less than three times in its 300-year history, and even its name means "ruins" in Hebrew, yet it has risen, phoenix-like, from its ashes. Restored to its former 19th-century Neo-Byzantine style and finally re-inaugurated in 2010, it is beautifully decorated – though not over-ornate – inside, and a very curious synagogue to visit, too.

Since it is used day in day out, you can watch believers on the ground floor studying the Torah or working with computers (apparently the most natural thing to do), albeit you cannot join them as a non-Jew. What you can do, for a fee, is take a lift to a walkway around the dome, from which you can see the synagogue's interior and admire its monumental ark, its stained glass windows, and the 19th-century ruins that have been incorporated into the current construction. From the footbridge, you can also access an outdoor gazebo that offers beautiful views of the Jewish Quarter, the minaret of the Mosque of Omar right next door, and the charming sunny plaza in front of the synagogue – the social center of the Jewish Quarter.

Tip:
Entrance is at the backside, on HaYehudim Street, a little bit hidden away.
There's an interesting audio guide available that takes you around the building.