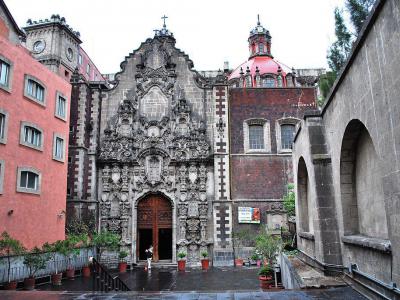 The Templo y Convento de San Francisco was once part of the largest convent in New Spain, whose chapels, monastery, hospital, and orchards covered 30,000 square meters. Destroyed during the 19th-century Reformation, only this church remains; apparently, the third to be built on the site in the 1710s, after the two sunk into the soft soil underneath Mexico City and had to be torn down.

Although, the entire building is known as the San Francisco Church, the entrance on Madero Street is actually the entrance to what was a side chapel in the once enormous complex, as the main facade is walled in and cannot be seen. Nonetheless, you can still witness a glimpse of the San Francisco's past glory: in front of the chapel is an atrium with several sets of stairs leading down to the church below (because it, too, is sinking). Inside there is an 18th-century gold-covered altarpiece dedicated to the Virgin of Guadalupe as well as the entrance to what was once the Chapel of the Second Station.

As you explore Centro Histórico, make sure you mark this on your map for an important milestone of Mexican faith.
Image by Thelmadatter under Creative Commons License.