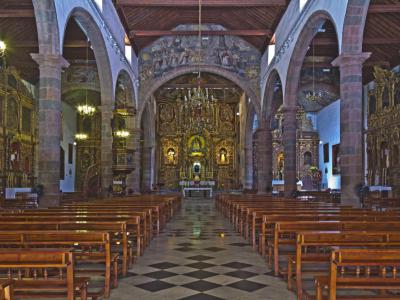 Iglesia de San Francisco de Asís (Church of St. Francis of Assisi) is located in Plaza del Principe in the city center. Originally the church was the Franciscan convent. Today it is a Catholic temple. The building of the church took place in the 17th and 18th centuries. It is made in Island Baroque architectural style, and has three naves. The front of the Church of San Francisco features two Corinthian capitals at the entrance with the image of Nuestra Señora de la Soledad (Our Lady of Solitude) above it.

The sanctuary has figures of La Inmaculada of the 19th century, San Francisco de Asis, Santo Domingo of the 17th century, the Master of the Ordeals, and more artifacts of religious and artistic value. Parroquia de San Francisco is one of the most important religious buildings in Santa Cruz de Tenerife.
Image by Koppchen on Wikimedia under Creative Commons License.