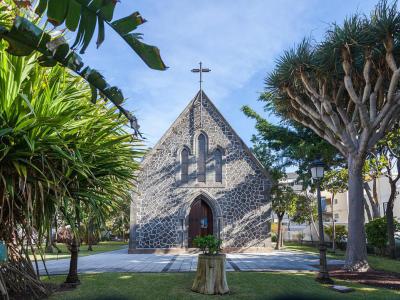 Iglesia de San Jorge (Church of San Jorge) is situated on Calle Viera Y Clavijo, near Plaza de los Patos. The former Anglican Church was built at the end of the 19th century. Its structure features the Latin-cross plan, lancet openings, cross-gabled roof and cut-stone façade. Inside the church the traditions of the Anglican architecture are also perceptible in the design of its nave and aisles, wooden framework and multiple wooden elements, as well as stained–glass windows.
Image by Diego Delso on Wikimedia under Creative Commons License.