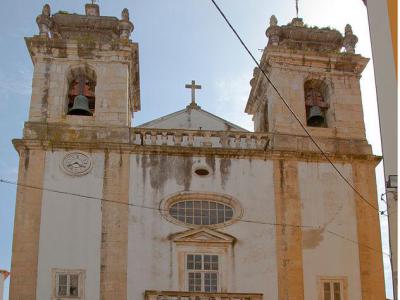 One of the oldest buildings in this city of old buildings is the Church of Saint Bartholomew. It is located on Rua dos Esteoros near to Commerce Square. It was built in the 10th century and named for the apostle Bartholomew.

The facade has a portal with two bell towers at the sides. Also on the facade is an oval window with bars. Below the barred window is a triangular pediment over a rectangular window and a balcony. Four pilasters connect the tower tops to ground level.

The church has one nave. The inside walls have paintings by Pascal Parente, a famous Italian artist. The chapel and the oversized altarpiece are baroque. The altarpiece is of marble and gilded wood. Above the altar and on the sides are paintings by Parente depicting the sufferings of Christ and the apostle Bartholomew.

The church is Baroque despite its age because of extensive restorations done in the 18th century. St. Batholomew's doesn't have the royal glitziness of some Coimbra churches, but it is among the most historical. It is a place of calm and serenity.
Image by Diego Delso on Wikimedia under Creative Commons License.