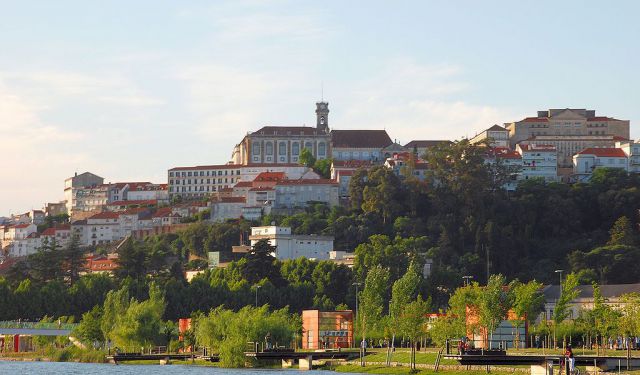 Image by nanabou on Wikimedia under Creative Commons License.

The old capital of Portugal, Coimbra is a riverfront city rich in history and architecture. Home to the historic University of Coimbra, many of the local landmarks are in one way or another associated with it. To see these and other prominent sights of Coimbra, follow this orientation walk and enjoy!
How it works: Download the app "GPSmyCity: Walks in 1K+ Cities" from iTunes App Store or Google Play to your mobile phone or tablet. The app turns your mobile device into a personal tour guide and its built-in GPS navigation functions guide you from one tour stop to next. The app works offline, so no data plan is needed when traveling abroad.

Largo da Portagem is a square that faces the Santa Clara Bridge. Portagem means the entrance or gate to the city. It is a small square with a garden. There are many shops, cafes and beautiful Baroque buildings around this square. You will see a statue in honour of Joaquim António de Aguiar that stands in the middle of the square on a high pedestal. This person was an outstanding Portuguese politician.
Image by estrelas e limóns on Wikimedia under Creative Commons License.
2

Rua Ferreira Borges is a shopping street in Coimbra. It is lined with many shops that are attractive for tourists as it is the main tourist area of Coimbra, located near the Old Cathedral. You can buy gifts and souvenirs in these shops. There is also a large book shop there that sells postcards, old and new, as well as rare books. It is a pedestrian street, lined with cafes and restaurants.
Image by Varun Shiv Kapur on Wikimedia under Creative Commons License.
3

The Arch Almedina or Arco de Almedina is one of the most visited tourist attractions in Coimbra. Almedina Arch in the historic downtown of Coimbra is the remnant of the defensive wall that once surrounded the city. This ancient city wall dates back to the sixth century. The arch was built in the twelfth century. The Arco Almedina has an old bell that used to ring in the morning and evening to open and close the city gates, and sounded the alarm at disastrous events. Now the arch and the tower are national historic monuments.
Image by Fernando de Sousa on Wikimedia under Creative Commons License.
4

4) Praça do Comercio (must see)

Praça do Comercio is famous for its square of shops in Coimbra. It is considered the heart of shopping in Coimbra. Tourists are attracted here by a wide range of goods; you can buy local traditional crafts. In the evenings and on weekends, the square becomes a very busy place. There are many cafes with delicious local cakes where you can have a rest while shopping.
Image by ho visto nina volare on Wikimedia under Creative Commons License.
5

The Santa Cruz Monastery is a National Monument in Coimbra. Because the first two kings of Portugal are buried in the church it was granted the status of National Pantheon. Founded in 1131 outside the protecting walls of Coimbra, the Santa Cruz Monastery was the most important monastic house during the early days of the Portuguese monarchy. St. Theotonius founded this community of canons regular and served as their first prior. The monastery and church were erected between 1132 and 1223. The monastery was granted numerous papal privileges and royal grants, which allowed the accumulation of considerable wealth, at the same time as it consolidated its position on the politico-institutional and cultural scene. Its school, with its vast library, was highly respected in medieval times and was a meeting point for the intellectual and power elites. Its scriptorium was used for the consolidation of royal power by King Afonso Henriques, thus it was not considered strange that he decided to be buried there.
Image by syvwlch on Wikimedia under Creative Commons License.
Sight description based on wikipedia
6

Jardim da Manga or Garden Manga is a Portuguese public area found behind the church of Santa Cruz, in the central historic part of Coimbra. There is a domed fountain decorated with sculptures in the garden. It symbolizes the fountain of life. This small XVI century garden is a national historic monument.
Image by Natália Tricô on Flickr under Creative Commons License.
7

Mercado D. Pedro V. is the main market in Coimbra that dates back to 1867. It is located near the main tourist attractions of the city. Here you will find fresh local products such as fruits and vegetables that grow in Portugal, fresh fish and drinks. The market is open every day of the week. There is a funicular at the Mercado that can take you up to the upper town.
Image by anybookers on Wikimedia under Creative Commons License.
8

Torre d'Anto is a Medieval tower built in the Medieval defensive wall of Coimbra and is one of the most popular tourist attractions. It remained as a mark of the military past of the old town. In the 19th century the poet Antonio Nobre lived there and the tower bears his name. The tower is square-shaped. You will see the intact stone exterior of the tower, narrow spiral staircase, the arched entrance door and windows of the facades. The Torre de Anto now houses the art gallery. You can see important artifacts and antique pieces which have been collected over the years.
Image by Fulviusbsas on Wikimedia under Creative Commons License.
9

9) Old Cathedral of Coimbra (must see)

Coimbra Cathedral is the only one of the Portuguese Romanesque cathedrals from the Reconquista times to have survived relatively intact up to the present. From the Gothic era (13th-14th centuries) there are several tombs with laying statues along the lateral aisles, some very much eroded. The most remarkable is that of Lady Vataça Lascaris (or Betaça), a Byzantine that came to Portugal in the beginning of the 14th century together with Elizabeth of Aragon, who was to marry King Dinis I. Her tomb carries the symbol of the Byzantine Empire: a two-headed eagle.

Image by Manuel Alende Maceira on Wikimedia under Creative Commons License.
Sight description based on wikipedia
10

10) University of Coimbra (must see)

The University of Coimbra (UC) is a Portuguese public university in Coimbra. Established in 1290, it is one of the oldest universities in continuous operation in the world, the oldest university of Portugal, and one of its largest higher education and research institutions. It is organized into eight different faculties according to a wide range of fields, granting academic bachelor's, master's and doctorate degrees in arts, engineerings, humanities, mathematics, natural sciences, social sciences, sports and technologies. It is a founding member of the Coimbra Group, a group of leading European research universities, whose inaugural meeting it hosted. The University of Coimbra has approximately 20,000 students, and hosts one of the largest communities of international students in Portugal, being the most cosmopolitan Portuguese university.
Image by truques on Wikimedia under Creative Commons License.
Sight description based on wikipedia
11

12) New Cathedral of Coimbra (must see)

The church architecture was influential in the Portuguese colonial world. The niches of the façade of the New Cathedral carry statues of four Jesuit saints. The Baroque decoration of the upper part of the façade, finished in the beginning of the 18th century, contrasts with the lower part, which follows a rigid Mannerist style. The church has two bell towers located just behind the main façade and a dome over the crossing. The interior, covered with barrel vaulting, has one nave with several lateral chapels and a transept with a dome and cupola. Both transept arms and the main chapel of the apse are decorated with huge, magnificent gilt wood altarpieces built between the 17th and 18th centuries which are fine examples of the so-called "national" Portuguese artarpiece style. The lateral chapels of the nave have altarpieces in Mannerist and Baroque styles.

Image by Saninha on Wikimedia under Creative Commons License.
Sight description based on wikipedia
13

King Dinis Statue stands on the Largo Dom Dinis (square of Dinis). Dinis is known to have strengthened the kingdom by improving the economy and reducing the power of Catholicism. The son of Afonso III, Dinis received a good education and was a poet. He was the one who established the first university in his country in 1290. The statue represents Dinis standing in royal apparel on a high pedestal.
Image by truques on Wikimedia under Creative Commons License.
14

The first part, located at the highest level of the Garden and at the top of the valley, constitutes the most formal area and it is divided in terraces. The lower terrace, known as the Quadrado Central (The Central Square) is the most primitive part of the garden and is decorated as other European Gardens of the 18th Century. In this terrace, adorned with a fountain from the 1940s, some trees planted during the time of Brotero can still be seen, such as: Cryptomeria japonica, Cunninghamia sinensis and Erythrina crista-galli.

The second part of the Garden, including the valley where once a small stream flowed, is the Arboretum, usually known as Mata of the Botanical Garden. Here we can observe, alongside with the Monocotyledoneae collection, a splendid forest of bamboos and a dense vegetation with exotic trees. In the Arboretum holds an excellent collection of Eucalyptus, about 51 species.

Image by Portuguese_eyes on Wikimedia under Creative Commons License.
Sight description based on wikipedia