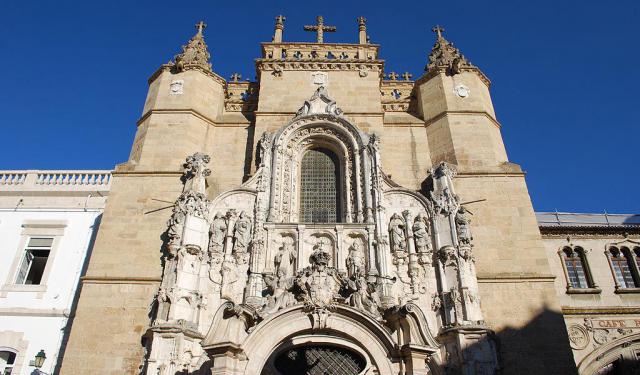 There are many magnificent and old churches in Coimbra. The buildings of the cathedrals and churches represent the most splendid architecture of Europe: Baroque, Renaissance, Rococo. The interior of these churches are very richly ornate by the works of art: paintings of the greatest European artists, sculptures and other art. This self-guided tour will lead you to the beautiful churches and cathedrals of Coimbra.
Image Courtesy of Wikimedia and Concierge.2C.
How it works: Download the app "GPSmyCity: Walks in 1K+ Cities" from iTunes App Store or Google Play to your mobile phone or tablet. The app turns your mobile device into a personal tour guide and its built-in GPS navigation functions guide you from one tour stop to next. The app works offline, so no data plan is needed when traveling abroad.

The University Tower dominates the university courtyard and buildings. It was built in 1537 as the palace of King John III became the University of Coimbra. It was declared, "There could be no university without a clock". So the tower was equipped with a clock and bells. A freshman student was not to be seen on the streets after the bell tolled.

When the tower was built no one had a watch. The clock and bells were needed to regulate the day. The current clock was installed in 1867. It replaced the clock from 1728, which in turn had replaced another clock. Old statutes require that the University clock should always be a quarter of an hour behind town time.

The tower is 112 feet high and it sits on the highest point on the city's skyline. Long called "Cabra" (meaning "Goat" in English) by local citizens, it has become the iconic symbol of Coimbra itself. The bells of Cabra would ring every 15 minutes and on the hour to announce classes. The most important worker in the University was the bell ringer.

Visitors may climb to the top of the tower for a small fee. It is not an easy climb, there are many stairs. The view from the top is breathtaking. One can see the Mondego River, all of the University and the town in every direction. Afternoons on a clear day are best for an unforgettable sunset.

Image Courtesy of Wikimedia and Alvesgaspar.
2

Saints have declared true beauty is within. The Saint Michael's Chapel at the University of Coimbra is plain enough on the outside. Inside it is a treasure. It was built in the 12th century as the private royal oratory. Saint Michael is the Archangel Michael, defender of King Afonso Henriques, the first king of Portugal.

Viewed from outside, the portal is the overwhelming feature of the facade. There are columns on each side of the portal, decorated with maritime symbols. The Portuguese royal crest and the crucifix were put in place in the 16th century on orders of King Manuel.

The inside of the chapel is lush with harmonious elements of decor furnished in the 17th and 18th centuries. The most prominent features of the space are the ceilings, the blue azulejo tiles, the high altar and tabernacle and especially the organ.

The altarpiece above the high altar has a large gilded throne from the 18th century. There are two side altars. On the left is the altar of Our Lady of Light, patroness of Academics. On the right is the altar of Saint Catherine. The azulejo tiles were set in 1613. They cover the walls of the nave like an arras or carpet.

The Baroque organ dates to 1737. It was commissioned by John V. It is covered with gilded chinoiserie. It has over 2,000 pipes and it works. There are masses every Sunday.
Image Courtesy of Wikimedia and GFreihalter.
3

Pombal was Chief Minister of King Joseph I. He had banned the Jesuits for their possible involvement in the attempted assassination of the King. He was a liberal reformer who effectively ruled Portugal during the reign of Joseph I.

The basic style of the cathedral is Baroque in the upper part of the facade and Mannerist in the lower part. Niches of the facade hold statues of four Jesuit saints. They were the only Jesuits not evicted by Pombal. There are two bell towers immediately behind the facade and a dome atop the transept.

The inside of the cathedral has barrel vaults, a nave with chapels and a dome and cupola. There are enormous gilded wood altarpieces from the 17th century in the arms of the transept and the main chapel. The side chapel altarpieces are Mannerist and Baroque.

Choir stalls in the main chapel and the carved baptismal font were taken from the Old Cathedral. The carvings were made in the 16th century Gothic-Manueline style by Pero and Felipe Henriques.
Image Courtesy of Wikimedia and Leandro Neumann Ciuffo.
4

Old Cathedral of Coimbra is the only Portugese Romanesque cathedral which has survived intact. Construction began after the Battle of Ourique in 1139. Prince Afonso Henriques had declared himself King of Portugal. He chose Coimbra to be his capital. Sancho I, second King of Portugal was crowned in the cathedral in 1185.

Building the cathedral was slow going. The basic structure was not finished until the early 13th century. The cloisters were not begun until 1218. The plans and construction of the cathedral are generally credited to a mysterious Master Robert, a French architect. The works were directly supervised by another mysterious Master Bernard.

The Old Cathedral has the look of a little fortress. It has high crenelated walls with almost no windows. A high tower in the west facade, showing Romanesque and Arabic elements, is reinforced by heavy buttresses at the corners. The north facade has a renaissance portal by sculptor Jean of Rouen.

The capitals of the Romanesque decorations feature stone carvings of birds and four-footed creatures and birds but no human figures. Most of the artisans that worked on the Old Cathedral were mozarabic. They were Christians who had lived and worked in Arab lands. They were not used to human representations, which were banned under Islam.
Image Courtesy of Wikimedia and Digitalsignal.
5

One of the oldest buildings in this city of old buildings is the Church of Saint Bartholomew. It is located on Rua dos Esteoros near to Commerce Square. It was built in the 10th century and named for the apostle Bartholomew.

The facade has a portal with two bell towers at the sides. Also on the facade is an oval window with bars. Below the barred window is a triangular pediment over a rectangular window and a balcony. Four pilasters connect the tower tops to ground level.

The church has one nave. The inside walls have paintings by Pascal Parente, a famous Italian artist. The chapel and the oversized altarpiece are baroque. The altarpiece is of marble and gilded wood. Above the altar and on the sides are paintings by Parente depicting the sufferings of Christ and the apostle Bartholomew.

The church is Baroque despite its age because of extensive restorations done in the 18th century. St. Batholomew's doesn't have the royal glitziness of some Coimbra churches, but it is among the most historical. It is a place of calm and serenity.
Image Courtesy of Wikimedia and Diego Delso.
6

Saint Theotonious, Portugal's first saint, was the driving inspiration for the Monastery and church of the Holy Cross. Santa Cruz Monastery was built between 1132 and 1223. The school and library of the Monastery were esteemed throughout the middle ages by intellectuals and political figures.

The early 16th century Romanesque monastery was completely redone by order of King Manuel. Diogo de Castilho, Machim and Jean of Rouen, Cristovao de Figureirado and Vasco Fernandes together with Chanterene, Boitaca and Diogo Pires the Younger all contributed art and labor to the rebirth of Santa Cruz Monastery.

The tombs of King Afonso Henriques and King Sancho I were transferred to the main chapel in 1530. Diogo de Boitaca created the plans for the church and the ribbed ceilings of the Chapter House. The Chapel of Saint Michael, the Cloister of Silence and the main portal complement and harmonize with the Manueline and Renaissance elements.

The carved choir stalls were installed in 1580. The stalls have a frieze of Portuguese ships in the Age of Discovery. The very complicated organ takes four people to play it. It has Japanese adornments and 4,000 pipes. Interior decorations feature Baroque azulejo tile panels.

The interior mixes Gothic and Baroque elements. A floridly sculpted arch in the facade opens to a cloister which is a perfect example of Manueline architecture.
Image Courtesy of Flickr and Varun Shiv Kapur.
7

Originally a Dominican friary and house of formation affiliated with the University of Coimbra, the College of St. Thomas was established in 1538. Its name referred to Dominican saint and Doctor of the Church Thomas Aquinas. Construction began in the 1540s under the rector Fr. Martinho de Ledesma, with plans by Asturian architect Diogo de Castilho. The educational and residential areas of the college were arranged around a central cloister. In the 18th century, the upper floor on the east side was expanded and renovated according to contemporary taste, including the addition of new windows and a balcony to the facade. The building faces onto Rua da Sofia, the street where the colleges of several religious orders came to be concentrated.

After the extinction of religious orders in 1834, the building was incorporated into the National Treasury and used as a warehouse until it was acquired by João Maria Correia Ayres de Campos, 1st Count of Ameal. In 1895, architect Silva Pinto was hired to adapt it to its new residential function using a neoclassical revivalist design, but most of its significant original features, including its cloister, several of its vaulted late-Gothic interiors and its Renaissance-style portico, were maintained. The latter, which included a significant sculpture group in the style of João de Ruão, figured in the Count's bookplate, designed around 1900. Ayres de Campos famously used the complex to display his vast art collection and to house his library, both of which were among the most important in Portugal at the time.

In 1928, the building was bought by the Ministry of Justice and repurposed as the city's courthouse, becoming known colloquially as Palácio da Justiça.
Image Courtesy of Wikimedia and Tribunal da Relação de Coimbra.
Sight description based on Wikipedia.
8

Church of Santa Justa was constructed in the eighteenth century on the grounds of an earlier church that was destroyed by floods. There is a large staircase leading to the church and two bell towers. You will see there the gilded altarpiece of the chapel. The interior houses valuable pieces: paintings, images and liturgical items. This is also the church that is one of the most visited by tourists in Coimbra and is a monumental church of the city.
Image Courtesy of Flickr and Vitor Oliveira.