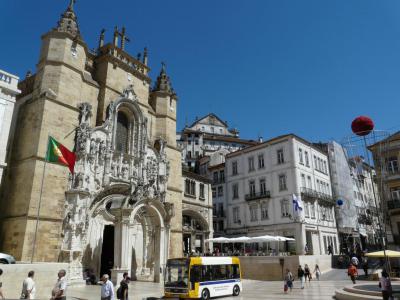 Saint Theotonious, Portugal's first saint, was the driving inspiration for the Monastery and church of the Holy Cross. Santa Cruz Monastery was built between 1132 and 1223. The school and library of the Monastery were esteemed throughout the middle ages by intellectuals and political figures.

The early 16th century Romanesque monastery was completely redone by order of King Manuel. Diogo de Castilho, Machim and Jean of Rouen, Cristovao de Figureirado and Vasco Fernandes together with Chanterene, Boitaca and Diogo Pires the Younger all contributed art and labor to the rebirth of Santa Cruz Monastery.

The tombs of King Afonso Henriques and King Sancho I were transferred to the main chapel in 1530. Diogo de Boitaca created the plans for the church and the ribbed ceilings of the Chapter House. The Chapel of Saint Michael, the Cloister of Silence and the main portal complement and harmonize with the Manueline and Renaissance elements.

The carved choir stalls were installed in 1580. The stalls have a frieze of Portuguese ships in the Age of Discovery. The very complicated organ takes four people to play it. It has Japanese adornments and 4,000 pipes. Interior decorations feature Baroque azulejo tile panels.

The interior mixes Gothic and Baroque elements. A floridly sculpted arch in the facade opens to a cloister which is a perfect example of Manueline architecture.
Image Courtesy of Flickr and Varun Shiv Kapur.