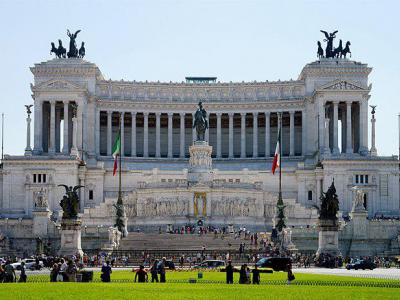 Il Vittoriano is a grand memorial to Vittorio Emanuele II, the first king of unified Italy. The monument is located in Piazza Venezia at the end of the Via del Corso, close to the Roman Forum, and is dominated by the king's equestrian statue. Otherwise known as the Altar of the Homeland, this colossal monument measures 135m wide by 81m tall, flanked on the sides with two massive Italian tricolors and chariot sculptures.

To the right of the king's statue is the Tomb of the Unknown Soldier, appeared after WWI, with an eternal flame permanently guarded by two soldiers. Climbing up the central staircase will allow visitors to enjoy, other than the monument itself, a sweeping view over the city. Ideal for picture taking, this spot is well worth it. Also, in 2007, for extra comfort, a lift was installed for visitors to ride all the way up to the rooftop for a bird's eye panorama of Rome. This ride costs a few euros.

Subject to controversy, initially, the monument endured criticism and was subjected to some derogatory nicknames like the "wedding cake," for example, being just one of them. Regardless of that, over time, it has proven to be one of the city's most visited sights after the Vatican and the Roman Ruins.

At the base of the complex, there is a museum of Italian Unification. Entrance to the museum is free.

Why You Should Visit:
Many Italians find it tacky, but there's something stunning to behold about a bit of triumphal architecture meant to rival the ancients.