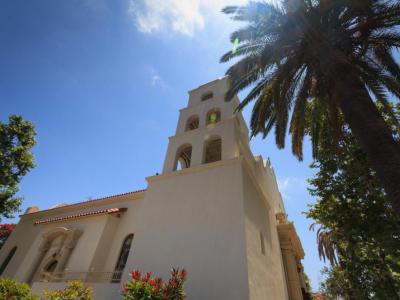 Completed in 1917 and dedicated 1919, the Immaculate Conception Church traces its history back to the first Catholic Mass celebrated in California. On Nov. 12, 1602, Captain Sebastian Vizcaino had a tent hastily erected on this spot so that three Catholic priests accompanying his Spanish expedition could celebrate a mass of gratitude for a safe voyage.

It was also near the site of the present Immaculate Conception Church that Father Junípero Serra celebrated his First Holy Mass in California, on July 2, 1769. On the hill overlooking the Old Town he planted the cross which marked the site of the Mission and the Presidio.

The cornerstone for the present house of worship was laid in 1868. In sylvan surrounds, the temple has some pleasing features, like a fine belfry housing one of the two original bells from the San Diego Mission.

The missions in California are a true destination and many offer stunning views, architecture, and examples of Spanish colonial detail. Now restored to its original splendor, this Old Town church is a beautiful, equally impressive example, minus some of the crowds and bustle of the more popular missions nearby.

The vestibule houses the baptismal font and confessional; then, as you enter the nave, your eyes are drawn to the sanctuary containing the altar, tabernacle, ambo and priest's chair. Look around at the stained glass windows, the paintings, statues and Stations of the Cross. There is a little gift shop on the grounds too, and you can light a few candles.
Image Courtesy of Flickr and Gary J. Wood.