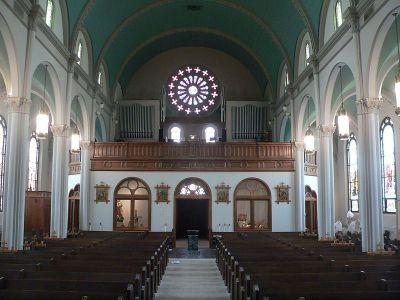 In August, 2007, Archbishop Elden Curtiss entrusted the care of the parish to the Priestly Fraternity of St. Peter to provide the Mass and Sacraments in the Traditional Rites of the Catholic Church to any who so desire them. The first Traditional Latin Mass in over 40 years was offered on Sunday, August 26, 2007. A personal parish dedicated to the Traditional Latin Mass is encouraged by Pope Benedict XVI in his 2007 Motu Proprio Summorum Pontificum on the Latin Mass.
Image by Ammodramus on Wikimedia under Creative Commons License.
Sight description based on wikipedia