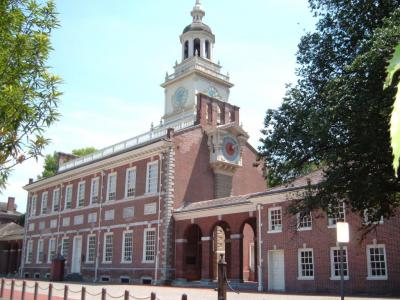 In 1729 it was becoming evident that Philadelphia needed a state house. In August 1732, the Scottish lawyer Andrew Hamilton showed his plans to the Provincial Assembly. The ground was broken for construction soon after in Philadelphia. The State House would be on the south side of Chestnut Street between Fifth and Sixth Streets. The cost was to be about 2,000 pounds.

The Colonial Government of Pennsylvania took occupancy of the State House immediately. Construction was designed and built by architect Edmund Woolley. The building proceeded piecemeal as funds were allocated. The State House was completed in 1753. It served as the Capitol of the Province and Commonwealth of Pennsylvania until 1799.

Independence Hall is a Georgian-style hall with a red brick facade. There is a central building with a bell tower and steeple. The center is attached by arcaded passageways to wings on either side. The steeple spire is 169 feet high. Old City Hall, Congress Hall, and Independence Hall together with Philosophical Hall, share Independence Square.

The Hall underwent several renovations in the 19th and 20th centuries. In the mid-20th century, the National Park Service carried out a reconstruction to restore the Hall to its 18th-century appearance. On the ground floor are the Assembly Room and the Supreme Court Room, separated by a vestibule. Behind the entrance is the Tower Stair Hall.

From 1775 to 1783, the Pennsylvania State House was the main meeting house of the Second Continental Congress. The Declaration of Independence was approved within its walls on July 4, 1776. Congress had to abandon the State House from time to time as British forces occupied Philadelphia. The United States Constitution was approved here in 1787.

Independence Hall has often served as a venue for speeches, rallies, and protests. Most events have been held on behalf of democratic and civil rights movements.
Image Courtesy of Flickr and Michael Gray.