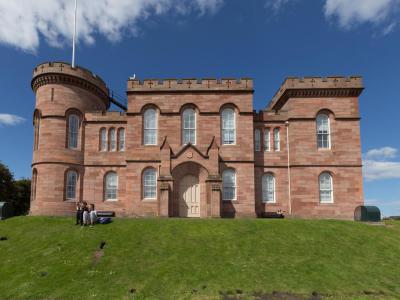 The castle is said to have been built by Máel Coluim III of Scotland, after he had razed to the ground the castle in which Macbeth of Scotland according to much later tradition, murdered Máel Coluim's father Donnchad I of Scotland, and which stood on a hill around 1 km to the north-east. The first Inverness Castle was partially destroyed by King Robert I of Scotland and a replacement castle was sacked in the 15th century. Scotland held a parliament in the castle to which the northern chieftains were summoned, of whom three were executed for asserting an independent sovereignty. The castle itself is not open to the public but the grounds are.
Image by Conor Power on Wikimedia under Creative Commons License.
Sight description based on wikipedia

This sight is featured in a self-guided walking tour of Inverness, Scotland within the mobile app "GPSmyCity: Walks in 1K+ Cities" which can be downloaded from iTunes App Store or Google Play. Please download the app to your mobile phone or tablet for travel directions for visiting this sight. The app turns your mobile device to a personal tour guide and it works offline, so no data plan is needed when traveling abroad.