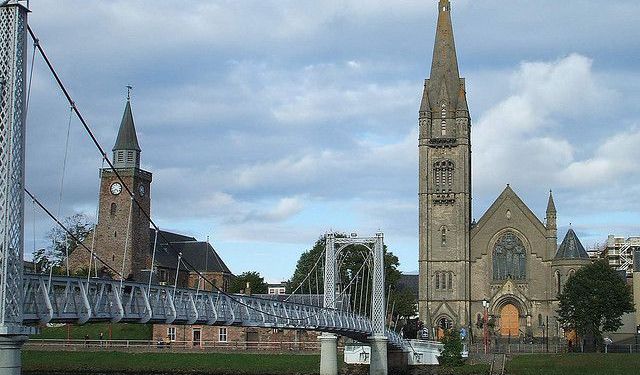 Inverness is home to a number of old churches and historical buildings. Many of them are situated on the banks of the River Ness and blend effortlessly with the surrounding landscape. This self-guided tour will lead you to the most prominent historical buildings in the city.
Image Courtesy of Flickr and conner395.
How it works: Download the app "GPSmyCity: Walks in 1K+ Cities" from iTunes App Store or Google Play to your mobile phone or tablet. The app turns your mobile device into a personal tour guide and its built-in GPS navigation functions guide you from one tour stop to next. The app works offline, so no data plan is needed when traveling abroad.

Inverness Castle is a 19th century, red sandstone castle that rests on the bank of the River Ness. It is the latest castle built on a site that has held a number of structures over the years. The earliest castle was built in 1057 by Malcolm III of Scotland.

The current structure was designed by a series of architects who made plans for different areas of the castle. William Burn designed the Sheriff Court. Joseph Mitchell designed the enclosing walls. Thomas Brown II designed the prison, which was later renamed to the District Court.

Visitors to Inverness will have an excellent view of the castle by walking along Castle Road next to the River Ness. Visitors may enter the north tower, but the remainder of the castle is not open for public tours.

Not far from Inverness Town House is another notable city landmark - a Georgian tollbooth steeple. This steeple was built beside the adjoining Old Court House and Jail in 1791. It rises 45 meters in the air and houses several bronze bells.
Image Courtesy of Wikimedia and Reading Tom.
3

Inverness Town House is a municipal building located on High Street between Castle Street and Castle Wynd. The Gothic-style building was designed by architect William Lawrie in 1882. The house was built to replace the very first town house in Inverness, which was built in 1708 and demolished 150 years later.

The house was modeled on the McManus, a museum and art gallery that was designed by George Gilbert Scott. A burgh coat of arms, recovered from a bridge that crossed the River Ness, is embedded in the ashlar stone from which the townhouse is comprised. That coat of arms dates to 1685 when the bridge was completed.

An update on the town house took place in 1898 when William Meikle & Sons installed stained glass windows to celebrate Queen Victoria's Diamond Jubilee. The building was also extended in 1907. It did not undergo a major refurbishment again until 2018.

The Inverness Town House is known for containing a large number of works of art. Those who wish to see the inside of the town house should try to schedule a tour in advance. These tours take place on Thursdays at 2 PM and 3:30 PM.

Located on Academy Street, Inverness Victorian Market is a unique shopping spot in the city. The main entrance on Academy Street has three round arches. This historic market was rebuilt in 1890 and reflects the splendor of the Victorian era. It includes the Market Arcade, which stretches from Academy Street to Union Street and Queensgate. The market is covered by a marvelous Victorian cast-iron and wooden-domed roof. Here you will find 45 shops and a nice café where you can rest after finishing your shopping.
Image Courtesy of Wikimedia and Reading Tom.
5

Inverness East Church is an evangelical church situated on the corner of Margaret Street and Academy Street. The building has stood here for more than two centuries, and the oldest part of the church dates back to 1798. To learn more about Sunday services and other events, check out the church's web site.
Image Courtesy of Wikimedia and Lirazelf.
6

The Old High congregation was the oldest congregation in Inverness. It is on a site which has been used for worship since Celtic times. St Stephen's was founded as a “daughter church” of the Old High in 1897. It is a Gothic building in Morayshire freestone, designed by WL Carruthers. The congregation serves a parish area which includes the city centre, part of the Crown area, and the southern suburbs of the city, including Drummond and Lochardil.
Image Courtesy of Wikimedia and Reading Tom.
Sight description based on Wikipedia.
7

Dunbar's Hospital was built in 1668 as a hospital and a home for the impoverished. The hospital has a rough-cast, harled finish and dormer windows surrounded by decorative brickwork. The arched doorway offers the same brickwork and a protective iron gate.

Above the door is a plaque that shows the coat of arms of Provost Alexander Dunbar, founder of the hospital. This plaque, with a date of 1676, is a reproduction of the original. Those who wish to see the original plate can find it at the Inverness Museum.

Dunbar's Hospital was used as a school until the Royal Academy opened in 1792. It was also, at times, divided into apartments, used for shops and as a senior citizen's center. It briefly returned to use as a hospital during the 1849 Cholera Epidemic. Today, the hospital is divided into a senior citizen's day center and a restaurant that is open on weekends from 9 AM to 4 PM.

The hospital is rumored to have been built from stone that was discarded from Oliver Cromwell's destroyed citadel.
Image Courtesy of Wikimedia and Kenneth Allen.
8

Abertarff House is the oldest house in Inverness. It is a 2 1/2 story town house that was built in 1593. It is not known who originally owned the large home. What is known is that Clan Fraser purchased the home in 1793. Alexander Fraser was the first Fraser to live in the Abertarff House and many more would follow.

The home was purchased by the Commercial Bank of Scotland in the 1800s to be used as housing. Once it fell into disrepair, the bank gifted the property to the National Trust for Scotland. Abertarff House was restored to its current condition in 1966.

Open hours may vary. Interior tours are offered on some weekends. Friday hours are 1 PM to 7 PM. Saturday hours are 11 AM to 7 PM and Sunday hours are 11 AM to 6 PM. Those who cannot take a tour inside the house should still plan to stop by to see the beautiful, unique and historic architecture of the building.
Image Courtesy of Flickr and summonedbyfells.
9

St. Columba High Church is dedicated to Saint Columba. It stands on Bank Street at the site of an old brewery. It was built by MacKenzie and Matthews between 1851 and 1852 in the Perpendicular Gothic style. The church was badly damaged by fire in 1939 but was restored between 1948 and 1953 to its current state. Sunday morning services begin at 10:30 A.M.
Image Courtesy of Wikimedia and Reading Tom.
10

The Gothic-style church was completed in 1893 from a design by architect Alexander Ross. The grand-size of the church allows for a congregation of up to 1,300. The church offers a tower, stair-tower, gable and porch. Its octagonal spire, which reaches 170 feet, is the tallest in the city.

Visitors can explore the grounds of the Free North Church, including the historic cemetery. Those wanting to join the church during worship are welcome to be part of the congregation during the 11 AM or 5:30 PM services on Sundays.
Image Courtesy of Flickr and Dave Conner.
11

Balnain House is located on Huntly Street and was built in 1726 in the early Georgian style as a town house. This historic building served as a hospital for Hanoverian soldiers after the Battle of Culloden. The building was restored and now houses the offices of The National Trust for Scotland.
Image Courtesy of Wikimedia and Reading Tom.
12

On Huntly Street, across the river from St. Columba High Church, you will find St. Mary's Roman Catholic Church. The church features a Gothic facade with crocheted pinnacles and open parapets. It was constructed in 1837 by William Robertson, but by 1894 the church had become too small to accommodate the growing congregation and the building was expanded. Inside you will find an altar made of Caen stone, as well as some beautiful stained glass. Sunday morning services begin at 10:00 A.M.
Image Courtesy of Flickr and sobolevnrm.
13

Inverness Cathedral is a Scottish Episcopal Church on the banks of the River Ness. The cathedral, also known as the Cathedral Church of Saint Andrew, is the seat of of the Bishop of Moray, Ross and Caithness. It was the first new Protestant cathedral built in Britain after the Reformation.

Inverness Cathedral was built in 1869 from a design by architect Alexander Ross. The cathedral is made from red tarradale stone and peterhead granite. The cathedral is noted for having the most northerly change-ringing church bells in the world.

The cathedral welcomes visitors throughout the year. The church doors are open from 10 AM to 4 PM daily. Likewise, the cathedral's gift shop and cafe are open every day except Christmas. A cathedral supervisor is on-hand to help with any questions.

Inverness is the capital city of the Scottish Highlands. The city has prehistoric roots that date as far back as 6500 BCE. However, much of the world associates the history of the city with its Medieval presence.

William Shakespeare wrote the play "MacBeth" based on the 11th-century murder of King Duncan. Though the play was fiction and the castle where the real MacBeth lived is no...  view more