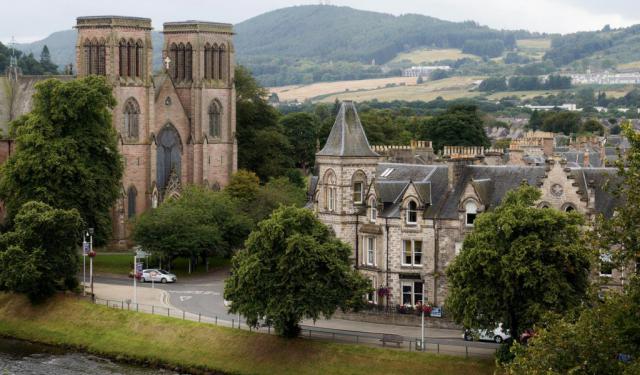 Image by dave conner on Wikimedia under Creative Commons License.

Inverness is the capital of the Highlands and one of the most popular cities in northern Scotland. The city has a number of historic buildings, prominent landmarks and wonderful sights. This tour will lead you to the most interesting attractions in this fabulous Scottish city.
How it works: Download the app "GPSmyCity: Walks in 1K+ Cities" from iTunes App Store or Google Play to your mobile phone or tablet. The app turns your mobile device into a personal tour guide and its built-in GPS navigation functions guide you from one tour stop to next. The app works offline, so no data plan is needed when traveling abroad.

Falcon Square is located in the center of the city. This small square is dedicated to John Falconer who founded Falcon Foundry in 1858. One of the foundry's original buildings still stands, although it now houses a Laura Ashley and Pizza Express. At the center of the square is a statue of a unicorn.
Image by Reading Tom on Wikimedia under Creative Commons License.
2

Inverness High Street, lined with a fantastic variety of local Scottish stores, is a popular area for shopping. This pedestrian street attracts visitors from all over the world and will satisfy the needs of every shopaholic. The street links directly to the huge Eastgate Shopping Center, another prominent Inverness shopping venue.
Image by Shadowgate on Flickr under Creative Commons License.
3

Inverness Town House, located on the corner of Castle and High Streets, is one of the city’s most impressive buildings. This Gothic house was built between 1878 and 1882 and designed by architects Matthews and Lawrie. It was the site of a historic meeting of the British Cabinet held in September 1921, the only meeting of the British Government ever organized outside London. Inside this Victorian building you will find many precious works of art.
Image by PunkToad on Flickr under Creative Commons License.
4

Not far from Inverness Town House is another notable city landmark - a Georgian tollbooth steeple. This steeple was built beside the adjoining Old Court House and Jail in 1791. It rises 45 meters in the air and houses several bronze bells.
Image by Reading Tom on Wikimedia under Creative Commons License.
5

Situated in the heart of Inverness on Castle Wynd Street, Inverness Museum and Art Gallery is the city's main cultural venue. Explore Scottish history through the museum's collections and exhibits. The museum has an excellent collection of Highland contemporary arts and crafts. Some of the museum's other collections relate to geology, wildlife, archaeology, culture, art and the history of the Highlands. The museum has a cafe and a store where you can buy gifts, books and souvenirs.
Image by John Allan on Wikimedia under Creative Commons License.
6

The castle is said to have been built by Máel Coluim III of Scotland, after he had razed to the ground the castle in which Macbeth of Scotland according to much later tradition, murdered Máel Coluim's father Donnchad I of Scotland, and which stood on a hill around 1 km to the north-east. The first Inverness Castle was partially destroyed by King Robert I of Scotland and a replacement castle was sacked in the 15th century. Scotland held a parliament in the castle to which the northern chieftains were summoned, of whom three were executed for asserting an independent sovereignty. The castle itself is not open to the public but the grounds are.

Image by Chris Hoare on Flickr under Creative Commons License.
Sight description based on wikipedia
7

The Flora McDonald Statue is situated in front of Inverness Castle and is dedicated to Flora MacDonald, the daughter of Ranald MacDonald of Milton and his wife Marion. Flora was a Jacobite heroine who helped Prince Charles Edward Stewart flee from the Hanovarian forces after the Battle of Culloden in 1746. Erected in the early 1900s, the statue depicts Flora looking southwest with her dog.
Image by Unukorno on Wikimedia under Creative Commons License.
8

St Andrew's Cathedral, a famous city landmark, is a Scottish Episcopal cathedral located on Ardross Street along the river. This Neo-Gothic cathedral was built during the 1860s, following the plans of architect Alexander Ross. The cathedral was consecrated in 1874 and features distinctive twin towers. This huge religious edifice was built with Red Tarradale Stone and features columns of Peterhead granite. The high altar, pulpit and reredos are made of Caen stone.
Image by Dave Conner on Flickr under Creative Commons License.
9

Highland House of Fraser is an authentic Scottish shop located on Bridge Street. This family business specializes in Highland dress and offers a great variety of traditional Scottish clothing, including hand-sewn kilts, tweeds and textiles. You can also purchase clan items, accessories, jewelry and gifts here. The staff is friendly and always willing to help.
Image by Nigel's Best Pics on Flickr under Creative Commons License.
10

Balnain House is located on Huntly Street and was built in 1726 in the early Georgian style as a town house. This historic building served as a hospital for Hanoverian soldiers after the Battle of Culloden. The building was restored and now houses the offices of The National Trust for Scotland.
Image by Reading Tom on Wikimedia under Creative Commons License.
11

Dunbar's Hospital, located on Church Street, was built in 1668 by Provost Alexander Dunbar of Barmuckety and Westfield as a hospital for poor people. This three-story building has served over the years as a grammar school, hospital, parish library and offices for a female work organization. When cholera spread to the town of Inverness, the building again was used as a hospital. It now houses apartments, a shop and a senior citizen's day center.
Image by Kenneth Allen on Wikimedia under Creative Commons License.
12

Abertarff House is a historic building that dates back to 1593. It is the oldest surviving house in Inverness. Its crow-stepped gables - well-known as "corbie steps" - stand out on the busy Church Street. The building was renovated in 1966 by The National Trust for Scotland.
Image by summonedbyfells on Flickr under Creative Commons License.
13

Located on Academy Street, Inverness Victorian Market is a unique shopping spot in the city. The main entrance on Academy Street has three round arches. This historic market was rebuilt in 1890 and reflects the splendor of the Victorian era. It includes the Market Arcade, which stretches from Academy Street to Union Street and Queensgate. The market is covered by a marvelous Victorian cast-iron and wooden-domed roof. Here you will find 45 shops and a nice café where you can rest after finishing your shopping.
Image by Reading Tom on Wikimedia under Creative Commons License.