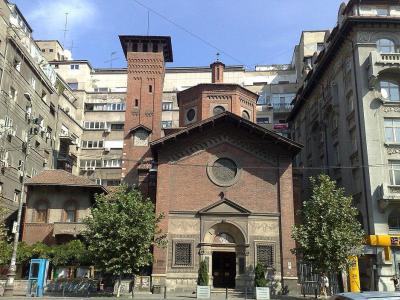 The Italian Church of the Most Holy Redeemer is a Roman Catholic church located in Bucharest, Romania, at 28 Nicolae Bălcescu Blvd., one of the city's busiest streets. The Neo-Gothic red brick edifice was built in 1930 to a design by Mario Stoppa and Giuseppe Furaboschi. Owned by the Italian government, it is surrounded by grey concrete apartment blocks. Services are held daily in Romanian at 6 PM, and on Sundays, in Polish at 9 AM, Romanian at 10 AM, and Italian at 11 AM.

The building was modeled on the Church of Santa Maria delle Grazzie in Milan. It features an impressive campanile with four bells. The surrounding blocks of buildings date back to the 1930s and give the church a contrasting background. The Italian Church suffered serious damage in the earthquakes of 1940, 1977 and 1986 but was later restored.

It remained closed for the public until 1968 and was reopened during the visit of Italian Prime Minister Amintore Fanfani.
Image by CristianChirita on Wikimedia under Creative Commons License.
Sight description based on wikipedia