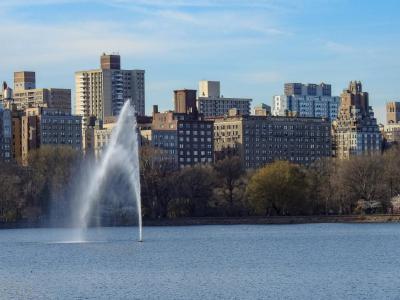 In the world's most famous park, there are several artificial lakes and ponds, but all small in size when compared to the magnificent billion-gallon Reservoir. The world's largest man-made lake back in the 1860s, it's visible from up high when flying over New York City, but you're better off seeing it from the ground while walking around – or, if you feel a bit more energetic, why not take a run?

A long-time favorite for sporty uptown residents, its raised 1.6-mile running track is a neat place to get 360-degree views of the skyline and, at night, the city lights twinkling in the distance.

Even when walks get long, they're certainly not strenuous due to the flat surface. Bikes aren't allowed on the path and foot traffic moves "one-way" counter-clockwise. The outside ring is better for runners, as it's much wider and less crowded.

The landscape north of the Reservoir, in the appropriately named North Woods, feels more like upstate New York than Manhattan. The 90-acre area contains the Loch, which is more like a walking path along a stream, and the Ravine, which conceals fairly dense wood along with five small waterfalls. It is a place where even seasoned New Yorkers can lose themselves.
Image Courtesy of Flickr and xiquinhosilva.