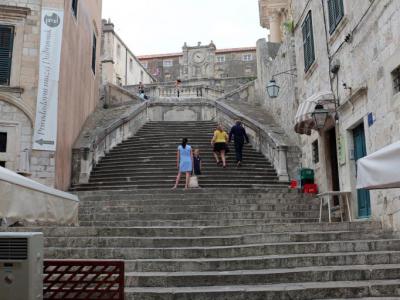 Designed by Roman architect Pietro Passalacqua, the Jesuit Stairs is yet another fine example of Baroque architecture in Dubrovnik. Bearing a striking resemblance to the well known Spanish Steps in Rome, this grand staircase was built in 1738. If you walk up the stairs, you will end up in Uz Jezuite Street where the church of St. Ignatius of Loyola and the Jesuit College (Collegium Ragusinum) are located. Stemming from the Baroque style planning – typical for this part of the Old Town, the staircase accentuates the prominent position of the Jesuit College and the church.

At the bottom of the stairs, in Gundulic Square, there is a market selling fresh produce from the neighboring villages, and if you happen to be here when the tower clock strikes noon, you may be surprised by a somewhat bizarre, if not say frightening (reminiscent of Alfred Hitchcock’s The Birds), flocking of pigeons gathering here to eat the grain offered to them each day at the same hour.

*** Game of Thrones Tour ***
The Jesuit Staircase provided backdrop for one of the most memorable scenes in the Game of Thrones series, doubling as the steps of the Great Sept of Baelor in King’s Landing from where Cercei must start upon her infamous Walk of Shame (or Atonement) in Season 5, Episode 10 ‘Mother’s Mercy’ in order to return home. Overall, her walk passes through four locations within the Old Town including, apart from the Jesuit Staircase – Od Margarite Street, St. Dominic Street and Ploče Gate.
Image Courtesy of Wikimedia and Own work.