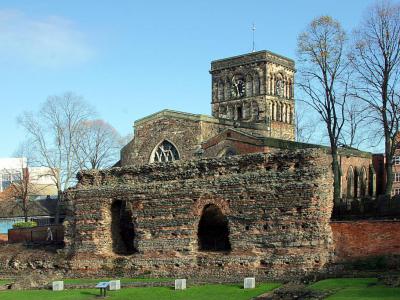 The Jewry Wall is believed to be the remaining wall of the public baths of Roman Leicester along with foundations of the baths, which are laid out in front of the wall. The wall is nearly 2,000 years old and is a rare example of Roman walling. It is the second largest piece of surviving civil Roman building in Britain. The Jewry Wall would have been the wall separating the gymnasium from the cold room.

The remains of the baths were excavated in the 1930s by Dame Kathleen Kenyon and date from approximately 160 A.D. The wall and baths are adjoined by the Jewry Wall Museum, which contains excellent local examples of Roman mosaics and wall plaster. The name of the wall is unlikely to relate to Leicester's Jewish community, which was never large, and which was expelled from the town by Simon de Montfort in 1231.

The Jewry Wall Museum was built in the 1960s, facing the Jewry Wall ruins in a building shared with Vaughan College. It housed artefacts from Iron Age, Roman, and medieval Leicester. With the ending of Vaughan College's use of the building in 2013, the whole site was acquired by the city council, and expansion and improvement plans were put in place.

The building, completed in 1962, is Grade II listed and until 2013 the museum was located below Vaughan College, part of Leicester University's Institute for Lifelong-Learning. Construction began in 1960 and finished two years later; the building was designed by Trevor Dannatt. The museum is run by Leicester City Council and is free to enter.
Image Courtesy of Wikimedia and NotFromUtrecht.
Sight description based on Wikipedia.

Leicester is one of the oldest cities in England, whose history goes back almost two millennia. The Romans arrived in the area around 47 AD, during their conquest of southern Britain. Following the Saxon invasion, Leicester was then captured by Danish Vikings, in the 9th century.

The settlement was first documented in the early 10th century, under the name Ligeraceaster. At the time of the...  view more

Leicester is a city in the East Midlands of England with a rich past. Valuable historical monuments in Leicester are under the special protection of the local government and are the pride of the city. Take this self-guided tour of central Leicester and admire the city's rich historical buildings.