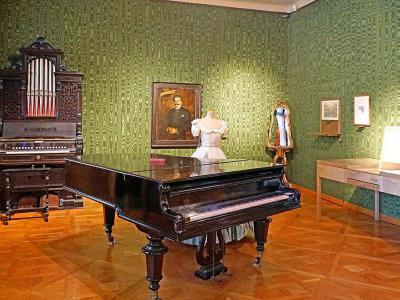 Fans of the Waltz King should head for the apartment on the first floor of Praterstraße no. 54 where the composer lived from 1863 until the death of his first wife, the glamorous opera singer Jetty Treffz, in 1878. It was there, under the high ceilings, that he composed "The Blue Danube", Austria's unofficial anthem, despite his father's attempts to drag him out of the music business and to hinder his musical pursuits.

The apartment has (German/English) displays of Strauss' original furnishings and instruments, with visitors able to get glimpses into the man, the composer, the conductor, the caricaturist, and the card player. One room, decorated with ceiling panels of cherubs, contains his grand piano, house organ and standing desk at which he used to compose. There's also a fascinating collection of ballroom memorabilia, including an Amati violin, gimmicky dance cards and quirky ball pendants, kept as mementos of the evening. Oil paintings from Strauss' last apartment, which was destroyed during WWII, are also on site.

Tip:
As you enter the first room, wave at the sensor hidden under the title-page display until "The Blue Danube" starts to play.
The apartment is not to be confused with the Strauss Museum, which instead explicates the entire Strauss musical family.