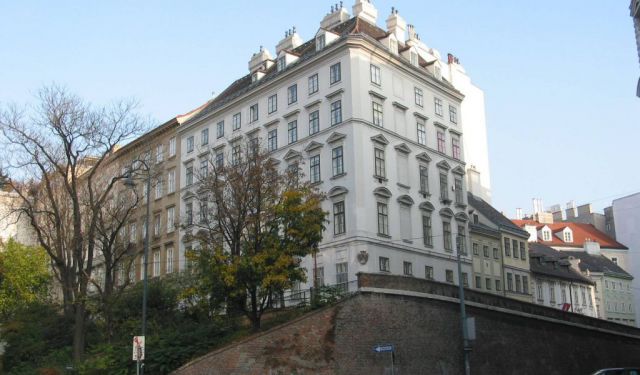 From creative artists to big thinkers, Vienna was the home residence for a number of celebrated people. Talented musicians, composers, architects, and even famous psychologist once resided in this beautiful city – once the capital of a great empire. Follow our self-guided walk to tour the former dwelling houses of Strauss, Mozart, Beethoven and Freud, now converted into museums which acquaint us with their lives and works.
Image Courtesy of Wikimedia and Extrawurst.
How it works: Download the app "GPSmyCity: Walks in 1K+ Cities" from iTunes App Store or Google Play to your mobile phone or tablet. The app turns your mobile device into a personal tour guide and its built-in GPS navigation functions guide you from one tour stop to next. The app works offline, so no data plan is needed when traveling abroad.

Fans of the Waltz King should head for the apartment on the first floor of Praterstraße no. 54 where the composer lived from 1863 until the death of his first wife, the glamorous opera singer Jetty Treffz, in 1878. It was there, under the high ceilings, that he composed "The Blue Danube", Austria's unofficial anthem, despite his father's attempts to drag him out of the music business and to hinder his musical pursuits.

The apartment has (German/English) displays of Strauss' original furnishings and instruments, with visitors able to get glimpses into the man, the composer, the conductor, the caricaturist, and the card player. One room, decorated with ceiling panels of cherubs, contains his grand piano, house organ and standing desk at which he used to compose. There's also a fascinating collection of ballroom memorabilia, including an Amati violin, gimmicky dance cards and quirky ball pendants, kept as mementos of the evening. Oil paintings from Strauss' last apartment, which was destroyed during WWII, are also on site.

Tip:
As you enter the first room, wave at the sensor hidden under the title-page display until "The Blue Danube" starts to play.
The apartment is not to be confused with the Strauss Museum, which instead explicates the entire Strauss musical family.

Out of total 11 of Mozart's abodes in Vienna, Mozarthaus at Domgasse 5 is the only one that still exists – restored in 2006 to commemorate his 250th anniversary – and is where the composer reportedly spent his happiest years. Perhaps this explains the significant number of compositions Mozart created while here, including the exquisite Haydn-dedicated quartets, a handful of piano concertos and "The Marriage of Figaro" and "Don Giovanni" operas. From this point on it was all downhill for Mozart, who then moved to the suburbs due to financial difficulties.

Unlike some other famous house-museums in Vienna, this one has none of the original furnishings to see; instead, it focuses on the composer's genius and allows visitors to imagine how the spacious, elegant apartment might have looked. Concerts are regularly staged here, along with some activities for children.

It might be a good idea to take the lift to the 3rd floor and start your way from there downward, exploring Mozart's life as a child prodigy touring all across 18th-century Europe until finally moving from Salzburg to Vienna. His vices – namely: womanizing, gambling and ability to waste excessive amounts of money – lend a spicy edge. The 2nd floor deals with different versions of his operatic works (some played in sync), while the 1st floor focuses on the years that Mozart lived at this exact address.

Why You Should Visit:
To explore the life and work of the musical genius in a unique setting in the heart of Vienna. Nowhere else did Mozart compose more music. Visitors can see not only the historical apartment but also an extensive presentation of major works by Mozart and of the times in which he lived.

Tip:
Save on the entrance fee by combining your ticket with either Haus der Musik or Dom Museum Wien.

The Pasqualati House is no different in appearance from any of the other houses along the quiet street of Mölker Bastei (built on a former bastion of the city walls), but it is the most famous of more than 30 places where Ludwig van Beethoven resided during his 35 years in Vienna.

Named after its original owner, Baron von Pasqualati, it was twice Beethoven's home from 1804 to 1815 – the mid-life period. He composed many of his best-loved works here, including Symphonies Nos. 4, 5, 7 and 8, Piano Concerto No. 4, numerous string quartets, as well as the magnificent – and solitary – opera "Fidelio".

Today, the two rooms on the 4th floor, which the composer occupied (plus another two from a neighbouring apartment), have been converted into a small museum with various intriguing memorabilia on display, such as a lock of Beethoven's hair, his salt and pepper pots, a photo of his grave at the Jewish cemetery in Währing, a rather gruesome death bed engraving, and early editions of his scores. The museum also contains busts and paintings of the great composer, including a famous portrait by J.W. Mähler, and a fine painting of his patron Prince Razumovsky, the Russian ambassador to Vienna.

Tip:
Note particularly the prints showing what the window view out over the Mölker bastion was like when Beethoven lived here, and the current view too – a fantastic 4th-floor look out onto the famous Ringstrasse.

A Vienna resident for more than five decades, Sigmund Freud is as synonymous with the Austrian capital as coffee houses and the waltz. His former 19th-century apartment at Berggasse 19, where he wrote many of his greatest works, is now something of a shrine and place of pilgrimage, though he took almost all his possessions – except his library, which he hurriedly sold – into exile (where they are displayed in London's Freud Museum).

The father of psychoanalysis, Sigmund Freud lived, worked and received patients here from 1891 until his unwilling departure from Vienna in 1938, to escape Nazi persecution. There are more than 420 items of memorabilia on display, including letters, telegrams and original editions of books, photos documenting Freud's long life, waiting-room furniture and various antiquities. A few rooms feature Freud-inspired art, a library and a shop, while a video room shows unique home-movie footage of the Freud family in the 1930s with a commentary by none other than Anna Freud.