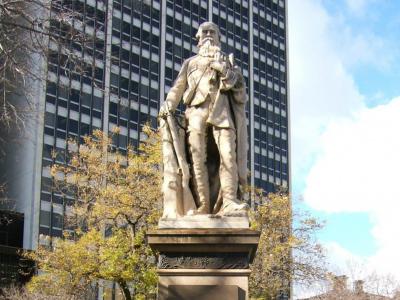 The statue of John McDouall Stuart (1815 – 1866) commemorates a Scottish explorer of Australia, one of the most accomplished and famous inland explorers of the continent. During the late 1850s-early 1860s Stuart made several expeditions searching for pastoral country and minerals, exploring vast plains, and ultimately became the first European to have successfully crossed Australia from south to north and back again.

These explorations eventually resulted in the Australian Overland Telegraph Line being built, and the main route from Port Augusta to Darwin being established, which is now known as the Stuart Highway. For his trailblazing exploits, in 1861 Stuart received the gold medal of the Royal Geographical Society.

The statue was built through public subscription (commenced in 1896), and was partly subsidised by the State. The design was submitted by William Maxwell of Adelaide. After he died in 1903, the work was taken over by several men, led by James White of Sydney.

Unsuccessful attempts to find a suitable block of South Australian stone prompted marble being imported from Carrara, Italy. The statue rests on the base of New South Wales trachyte, topped by a bronze frieze featuring a Scottish Thistle. The pedestal features a globe with Australia in polished relief showing Stuart’s route; there are also names of the members of Stuart’s party inscribed on the side.

The unveiling ceremony took place on 4 June 1904 amid controversy. None of the four surviving members of Stuart’s final expedition attended the opening in protest against the selection of Maxwell’s design, arguing that it bore no resemblance to the real man, a “typical bushman he undoubtedly was”.

Despite the furore, or perhaps partly due to it, the memorial proved rather popular. A remembrance ceremony at the statue is held every year by the John McDouall Stuart Society.
Image Courtesy of Wikimedia and YellowMonkey.