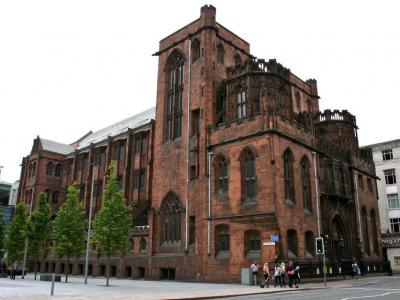 The John Rylands Library is housed within a Victorian Gothic building, located on Deansgate in Manchester City Center. Opened to the public in 1900, the building was designed by Basil Champneys, at the request of John Rylands’ widow. Rylands himself was Manchester’s foremost textile manufacturer, and became the city’s first multi-millionaire. The philanthropy of businessmen like Rylands greatly aided the development of the city at the turn of the 20th century.

Since its creation, the library has been extended and enlarged seven times, and is now operated by the University of Manchester. The most valuable special collections found in the university library have been moved to John Rylands Library, so as to allow the public greater access to them. The most notable of these artifacts is the earliest discovered manuscript of a New Testament text. The library also contains personal effects of public figures such as Elizabeth Gaskell and John Dalton.

The stunning, ornate Gothic interior of the library has made it a popular tourist attraction in its own right, and the university offers regular tours, allowing visitors to peek behind the scenes of this famous building.
Image by Mike Peel on Wikimedia under Creative Commons License.