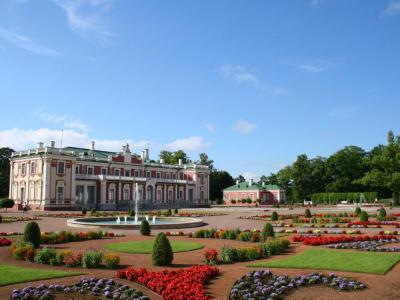 Kadriog Palace and Park has a long history in Tallinn. It was commissioned by Peter the Great after he successfully brought Estonia under his domain. The Palace was to be a sea-side home for himself and his wife, Catherine I of Russia. Building of the Palace was started in July of 1718. Niccolo Michetti, the Italian architect, designed this beautiful Baroque Palace.

Although only two stories tall, it is a very grand building. Unfortunately, Peter died before the building was completed. Catherine lost all interest in the palace after the death of her husband, and never visited it, even after the palace was completed. Parts of the palace were left to fall into disrepair; however, the great hall has been lovingly preserved and restored.

The Palace has had several tenants and uses over the centuries. Almost all of the Russian ruling class has been to the palace over the years. Estonia’s President, Konstantin Päts, undertook an extensive renovation in the 1930s. It was also home to the Art Museum of Estonia until just recently. In 2000, the palace was reopened after extensive renovations and it now houses a branch of the museum. Now that the building has been restored, work is ongoing in the gardens and surrounding structures on the property.

The gardens, that have been redone, are fabulous. Kadrioru Park is a beautiful open space with a picturesque natural landscape, as well as fields and forest groves. Visitors may traverse the park through a collection of twisting paths. Kadrioru Park is also home to the symmetrical Swan Lake, one of the most popular destinations inside the open space.

There is an admission fee for the museum portion of the palace and guided tours are available in several languages for the palace. Please call at least one week ahead to schedule a tour.
Image Courtesy of Flickr and Eesti.pl.