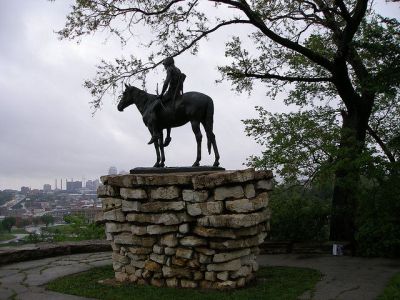 The Scout is a famous statue by Cyrus E. Dallin in Kansas City. It is more than 10 feet tall, and depicts a Sioux Indian on horseback surveying the landscape. The Scout was conceived by Dallin in 1910, and exhibited at the 1915 Panama–Pacific International Exposition in San Francisco, where it won a gold medal. On its way back east, the statue was installed on a temporary basis in Penn Valley Park. The statue proved so popular that $15,000 in nickels and dimes was raised to purchase it through a campaign called "The Kids of Kansas City."

The statue was dedicated in 1922 as a permanent memorial to local Indian tribes. Several area attractions have been named after the iconic statue, most notably, Kansas City Scout, which is the Kansas City Metropolitan Area's electronic traffic alert system. It also both inspired the name of the National Hockey League's Kansas City Scouts and was featured on the team's logo.
Image by kansas_city_royalty on Flickr under Creative Commons License.
Sight description based on wikipedia

This sight is featured in a self-guided walking tour of Kansas City, Missouri within the mobile app "GPSmyCity: Walks in 1K+ Cities" which can be downloaded from iTunes App Store or Google Play. Please download the app to your mobile phone or tablet for travel directions for visiting this sight. The app turns your mobile device to a personal tour guide and it works offline, so no data plan is needed when traveling abroad.

The Kansas City Crossroads District has become one of the trendiest art communities in the Midwest. The former industrial and warehouse area now is where many progressive art spots have established themselves. Have a look at some of the grandest and edgiest art in the Crossroads!

The Kansas City Plaza has become popular as a 15-block district full of shops and fine restaurants. The Plaza gives visitors the opportunity to be delighted by the representative architectural monuments like the Giralda Tower, and the J. C. Nichols Fountain, and also by museums such as The Kemper Museum of Contemporary Art. The Country Club Plaza has ranked in the top 60 of the world's...  view more

Kansas City's downtown is rich in historic neighborhoods. The Crown Center area, right near Union Hill, offers some of the greatest Kansas City landmarks, such as Liberty Memorial, the Union Station and the Crown Center Entertainment Complex itself. Take a walk to see all the memorable sights!

Kansas City is the largest city in Missouri and its name is derived from the Kansas Indians who lived along the Missouri River. The city is famous for its contribution to jazz and blues, as well as cuisine – the well-known Kansas City-style BBQ. Stroll around and admire the Art Deco styling, browse the museums, the eclectic shops, check the riverboat casinos, or relax in a jazz club. You can get...  view more

Kansas City's northern downtown is sprinkled with interesting landmarks. It is especially famous for having some remarkable early skyscrapers dating from the 1920s and 1930s. The new Charles Evans Whitaker Courthouse and neighboring Old St. Patrick Oratory offer some new beauty as well. Have a look at these landmarks.