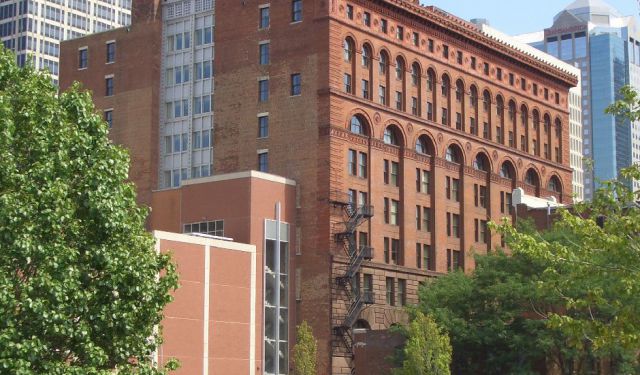 Image by charvex on Wikimedia under Creative Commons License.

Kansas City is the biggest city in Missouri. It covers 318 square miles (820 km2) of land. The city was founded in 1838, and being several times a battle field during the Civil War left its stamp on the city's architectural styles. Kansas city is also famous for its contribution to cuisine and music styles, such as blues and jazz. The city is rich in historic monuments and edifices, such as Mainstreet Theater, Lewis and Clark Memorial, and the New York Life Building.
How it works: Download the app "GPSmyCity: Walks in 1K+ Cities" from iTunes App Store or Google Play to your mobile phone or tablet. The app turns your mobile device into a personal tour guide and its built-in GPS navigation functions guide you from one tour stop to next. The app works offline, so no data plan is needed when traveling abroad.

The 29-story city hall building sits between East 11th and 12th Streets and Oak and Locusts Streets. It was built in 1937 in the Neo-Classical and Beaux-Arts styles. It's one of the tallest city halls in the country and is known for its Art Deco details–especially on the interior.

There are elaborate marble stairways and lots of bronze features that honor Kansas City's history. Details range from simple things like the doorknob plates to elaborate sculpted brass elevator doors. Statues and fountains surround the building at ground level. The six-story base structure's top floor is capped with relief sculptures depicting the city's early years and growth.

For visitors, the building is also notable for its 30th-floor observation deck. The building is the third tallest in the city, but it dominates the skyline since it stands on a hill. The views of the city and the surrounding historic buildings can't be beaten.

Image by KindaGuitarded on Wikimedia under Creative Commons License.
2

Sometimes called the Empire Theater, the Mainstreet was built in 1921 and designed by Chicago firm Rapp & Rapp. Vaudeville and movies were popular shows at the 3,200 seat theater for many years; it was the largest theater in town until the Midland Theater opened in 1927. It's designed in Neo-Classical and French Second Empire styles with a French Baroque interior. There was a tunnel connecting it to the nearby Presidential Hotel to allow actors to enter the theater from their dressing rooms, but it eventually became more useful to bootleggers trying to dodge the police during Prohibition. The basement and sub-basements also had spaces to keep animals for vaudeville shows, including a pool for seals and an elevator large enough for elephants.

Durwood Theaters purchased the theater, the forebearer of AMC, in the late 1950s and renamed the Empire. While it became primarily a movie house, the screen was designed to fold down to allow for the occasional live show. The theater was eventually split into two screens, using the balcony area to add the second theater. By the 1980s, it was operating as a four-screen cinema. The building entered a period of decline with an uncertain future, but a group of concerned citizens rallied behind the building to get it added to the National Register of Historic Places.

The city purchased the building in 2004 as part of its Power & Light District revitalization plan. The theater reopened with its original name under AMC's brand again in 2009. AMC sold off the cinema, and it is now known as the Alamo Drafthouse Cinema Mainstreet. The theater is state-of-the-art, with both 35mm film and 4K 3D digital projectors. The lobby bar is The Chesterfield-Mainstreet, and The Chesterfield is attached with seated dining and a craft cocktail menu.

Image by Drive-In Mike on Flickr under Creative Commons License.
3

This landmark Art Deco skyscraper was built in 1931. At the time, the 36-story building was the tallest west of the Mississippi. The building is so ubiquitous to the city that its profile is used on advertising for the Power & Light District and even the city as a whole. The most notable feature of the building is the huge Art Deco lantern that adorns the top. The lantern has prismatic glass panels that reflect an orange-red glow, while recessed setbacks in the building feature LED colored lights.

The Power & Light Company left the building in 1991. The city went through several proposals to redevelop the building into a convention center and hotel, but none of the proposals hit home. Since 2014, the building has been an apartment tower with 210 units–the result of a significant refurbishment project that has the building shining. The lobby is still adorned with gorgeous Art Deco details in the light fixtures, air vents, and doors; it's now used as an event space for groups of up to 500.
Image by Noah Jeppson on Flickr under Creative Commons License.
4

Today the Midland is Kansas City's premier concert venue, currently known as the Arvest Bank Theatre at the Midland. The 3,200-seat theater is in the Power & Light District and was completed in 1927 and is designed in French and Italian Baroque style. The outside of the theater's facades is ornamented with arches, urns, swags, leaves and flowers, and winged figures. There are over 500,000 feet of gold leaf throughout the building, and five giant hand-cut crystal chandeliers hang from the ceilings. Over the years, the building was used by AMC as a movie theater and for various concerts, stage shows, and ballets.

In 2008, the building went through a significant renovation. The floor plan is now open to allow for standing-room-only events or cabaret-style tables. The office portion of the building now houses lounges and bars. All renovations were done to meet preservation standards, and even the exterior marquee has been restored to look as it did in 1927. The theater has been listed on the National Register of Historic Places since 1977.
Image by Mwkruse on Wikimedia under Creative Commons License.
5

The Central Library building was built in 1897. Since 2004 it has been the main branch of the Kansas City Public Library System, and it is where all of the system's administrative activities occur.

The building began life as the First National Bank Building. It's a masterpiece of craftsmanship with marble columns and bronze doors. A major renovation project was necessary to get the building back in shape, and a fifth-floor needed to be added. The library system made it happen thanks to the public-private partnership headed by the Downtown Council.

The Central Library's Missouri Valley room has one of the largest collections of local history in the region, including published materials, newspapers, maps, and other documents from the city's earliest years. There are meeting rooms, screening rooms, and a coffee shop. The building is on the National Register of Historic Places.
Image by Nightryder84 on Wikimedia under Creative Commons License.
6

Built in 1890, the New York Life Building was Kansas City's first skyscraper. The building is identical to one that New York Life built around the same time in Omaha. It's built in the Renaissance Revival style and was designed by Frederick Elmer Hill of New York, who also designed the local Grace and Holy Trinity Cathedral and Convention Hall.

At first glance, the brick and brownstone building isn't as striking as some of the other Art Deco buildings in Kansas City, but it's finishing touches are superb. A statue of a nesting bald eagle, complete with eaglets, is mounted above the main entrance. It contains more than two tons of bronze and was made by sculpture Louis St. Gaudens. When the building was completed, it completely changed the skyline of Kansas City and beckoned the start of the skyscraper era.

The building was renovated in 1996. Since 2010, the building has been home to the Roman Catholic Diocese of Kansas City-Saint Joseph and is known as Catholic Center.
Image by Charvex on Wikimedia under Creative Commons License.
7

When the Commerce Trust Building was built in 1907, it was the tallest building in Missouri. It houses Commerce Bancshares; it was the largest bank in Kansas City at the turn of the century. It's on the National Register of Historic Places and was the city's second-tallest skyscraper, after the New York Life Building. The building was designed by Jarvis Hunt, who also designed Union Station. Commerce Bancshares continues to operate the building, and they completed a $48 million renovation to the facility in 2004.

The building is notable for its red granite and terra cotta facade and its landmark clock on the corner of East 10th Street and Walnut. The lobby features a dramatic glass ceiling with specialty lighting to give the lobby a charming glow from replicated sunlight.
Image by Charvex under Creative Commons License.